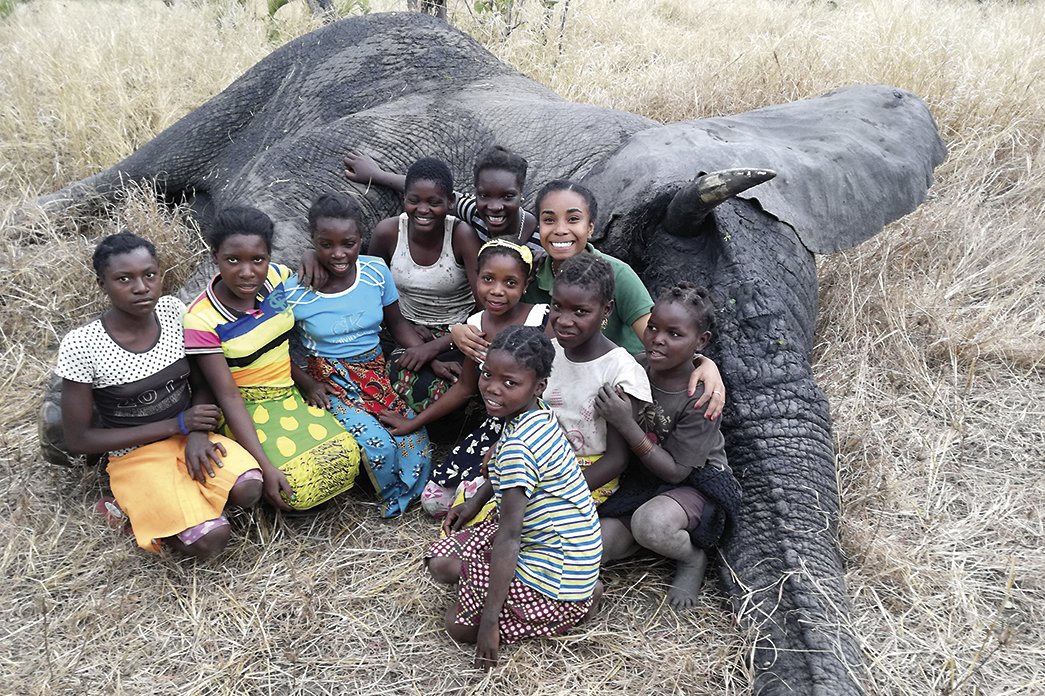 Dominique Gonçalves is an ecologist out of conviction and a caregiver of elephants out of passion, who helps preserve these large mammals in the Gorongosa National Park, in Mozambique. Protecting biodiversity, in light of population growth, is the greatest concern of the young woman who is a constant presence in events promoted by National Geographic.
She grew up hearing the stories her father told about Gorongosa. There, where human silence lives, is the workplace of Dominique Gonçalves, who is part of the team that monitors the eight hundred elephants that now inhabit the park. But before having this fascinating life, she left Sofala for Maputo and did a degree in Ecology and Conservation of Terrestrial Biodiversity at the Eduardo Mondlane University. During 2014, the Gorongosa National Park opened the Biodiversity Lab and the young woman applied. «I sent an email, through Gorongosa’s website, saying that I would like to be considered for a work placement, and Vasco Galante promptly replied that it was not possible at that time», recalls the ecologist. In the meantime, the communication director forwarded the email to the park’s scientific director, Marc Stalmans, and three days later, Dominique saw her dream beginning to come true.
Her degree thesis was worth a tea and a short conversation where it was decided that she could begin a work placement. However, the placement did not happen as was scheduled, and Dominique was already halfway through ecological and social studies in Stockholm when she was called to Gorongosa. «Joyce Poole, an elephant researcher, needed an intern, but I couldn’t leave that project and I didn’t go,» she explains. Later, she was again contacted by the Park to join an ornithology course and she seized the opportunity. She was selected and spent three months in the US studying migratory birds. On American soil, Dominique went to the Jackson Wild Film Festival, which that year, in 2015, was about elephants, and met Joyce Poole. «We got along really well; I believe this made me switch from birds to elephants, along with my thesis on medium and large mammals, and who wouldn’t like to work with elephants? It’s fascinating,» she confesses with a smile in her voice.

«Who wouldn't like to work with elephants? It’s fascinating.»

Now, in Gorongosa National Park, in addition to helping preserve the species, she takes her life story to the projects for girls that the Carr Foundation has with the community. Dominique Gonçalves is now, together with the elephant project, doing a PhD in Biodiversity Management at the University of Kent in England. She is often seen in National Geographic initiatives, where she talks about Mozambique, the admiration she feels for the work of Greg Carr, the philanthropist of Gorongosa Park and the elephants, for whom she feels an enormous empathy, admiring the concept of family nurtured by the matriarchs. And for Vasco Galante, partly responsible for this happy story, the young woman is «a great example for everyone, in Mozambique and in the world, of how dreams, in order to come true, have to be pursued with perseverance and strength of will». And in 2019, Dominique, who listened to her father’s stories and dreamed of taking care of animals, took her grandmother to see Gorongosa’s elephants for the first time.