«Irony is the best weapon!»

He is an artist and a journalist, dividing his work between cartoons and painting. António Maria de Almeida Calado da Maia was born in Rio Maior in 1951. The twists and turns of life decided that, after having attended three courses in higher education, his talent for drawing and painting, which he had inherited from his mother, had the final word, just as his «inflamed critical spirit». An ironic and quiet spirit, just like one of his surnames [Calado means quiet], but which materialises in cartoons and which is, after all, a very audible cry, «a clear shot at the target», exposing the weaknesses of society. He started publishing cartoons in 1978 in the weekly Edição Especial, but other collaborations soon followed with the  newspapers Tempo, A Tribuna, Expresso, Semanário, A Capital, the newspaper 24 Horas and magazines Fortuna and Villas&Golfe, among others. He currently publishes cartoons in the Correio da Manhã. Although António Maia transfers humour to the tip of a pen, to which he adds irony, sarcasm, creativity and an awareness of the world surrounding him, he doesn’t use it up, as we can bear witness to in the words below. He has held many solo and collective exhibitions, as much with cartoons as with paintings, in Portugal and abroad, and has won numerous awards. He has been making «irony the best weapon» for more than 40 years. In fact, his painting has also «sometimes, sinfully, slipped towards humour and social criticism». Gil Vicente would have agreed!

You studied law, sociology and history of art. What tricks has life played on you, or have you played on it, to finally reach the world of cartoons?
I did indeed attend three university courses. Half way into sociology, military service, the revolution, and troubled times changed everything. Then dissatisfaction, new times, new policies and visions did the rest, until my knack for drawing and an inflamed critical spirit took me to the newsrooms. There I discovered how to use them journalistically and artistically. Life plays, without warning, the tricks that it fancies.

Do you have any training in the arts, or are you self-taught?
I’m self-taught. I inherited the talent for drawing and painting from my mother.

Are we going through troubled enough times - political, social, etc. - to inspire you to create cartoons?
Our politicians and other social players have shown a touching generosity towards this stunned cartoonist. A country governed for decades by the formidably mediocre and the extraordinarily incompetent, who have led us to all possible and imaginable difficulties, is always a source of inspiration. As someone once said, all men are born free and equal. But then there are those who go into politics.


«A country governed for decades by the formidably mediocre and the extraordinarily incompetent […], is always a source of inspiration»

Is there any ‘tempting’ figure that you have yet to portray?
There are many tempting figures to portray. But, as the cartoon, so to speak, will ‘eternalise’ the featured politicians, some are not good, bad, corrupt, active, etc. enough, to deserve a cartoon!

Have you ever been censored or prosecuted? If so, would you like to tell us why?
I’ve never been censored or prosecuted. I received many ‘messages’ and it went no further than that. Actually, contrary to what is believed, I think that the cartoon must be a clear shot at the target, in such a way that the target has no chance to return fire. And for that, irony is the best weapon. Not the insult, the personal attack.

Is there any topic that is still ‘forbidden’ in Portugal? And in other places?
In Portugal, I believe that there are no longer any taboos, or forbidden, unapproachable topics. Democracy and freedom of expression are to blame. We and much of the Western world are the exception. In much of the world that lives with religious fanaticism, in dictatorships, theocracies or pseudo-democracies, this freedom of criticism does not exist. There are cartoonists there, but they are condemned to praise the regime and attack its ‘enemies’. 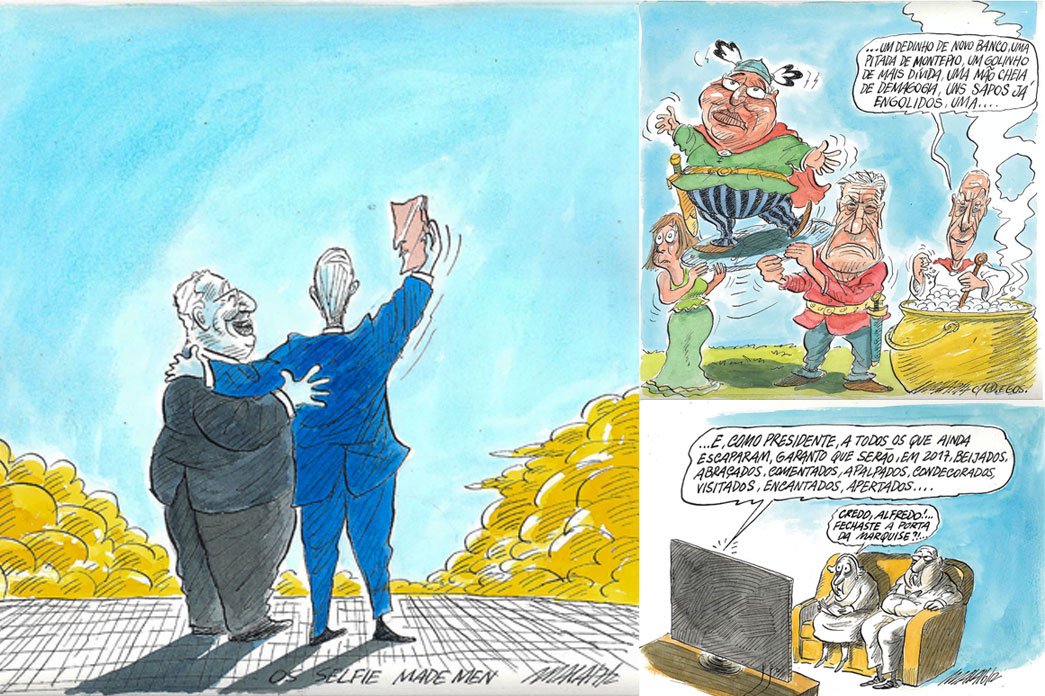 You have collaborated with many media outlets, including Villas&Golfe. What is your assessment of these years of collaborations?
In general I have been happy with the work I have done with so many, in fact almost all, of the nation’s newspapers and magazines. I love what I do. For some years now, in a special newspaper, the Correio da Manhã.

What role does painting play in your life?
I married the cartoon, there’s no doubt. But I have a parallel and troubled life with painting. I don’t think either of them have any suspicions, but...


«I married the cartoon, there’s no doubt. But I have a parallel and troubled life with painting»

If you had to integrate your painting into some artistic movement, what would it be?
My painting has no desire to be defined. But it’s not for me to say. I don’t think it fits into any past or contemporary movement. Classifications simplify things too much. It is painting struck by current life and sometimes it sinfully slips towards humour and social critique. And it’s always figurative.

What do the many awards you have received mean to you?
Awards are always a sign that your work has touched someone, some people. If by exposing what I feel, what I imagine, I bring out other sensibilities and visions, the role of these works has then been achieved. I don’t work to see things go in the drawer. But I do strive for my works to make their way through others. Maybe they will.