«Whenever I came across wine-related pieces, I would buy them» 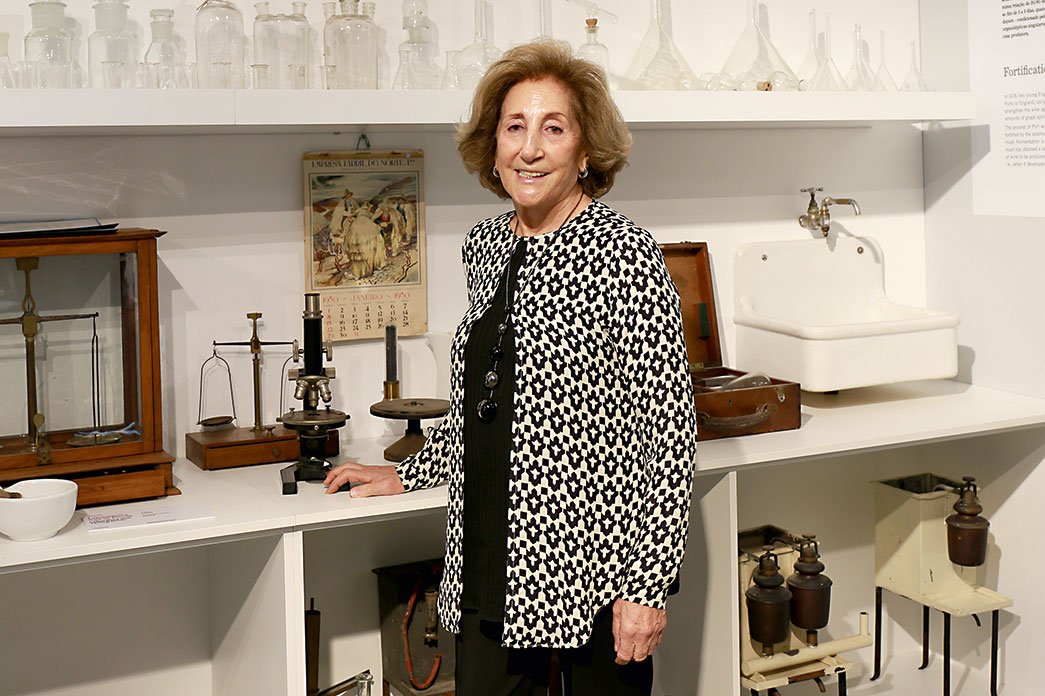 Tenderly and humbly, she welcomed us in her new cultural space – the Wine Museum Centre Fernanda Ramos Amorim –, which is in perfect harmony with the magnificent landscape of the Quinta Nova Nossa Senhora do Carmo estate, in Covas do Douro. Fernanda Amorim is a natural-born collector of pieces that preserve the cultural memories of the Douro region. The wine museum opened its doors in August. The modern 200-sqm project was designed by architect Arnaldo Barbosa – known as one of the Douro’s architects. In little more than half an hour, the compiler of this production gave us a guided tour, in which she showed us the reflections of the Douro’s age-old tradition through the pieces exhibited in the museum. Gathered over the years by the collector, the pieces from the 19th and 20th century have given rise to a cultural space well worth seeing. This museum is here to stay and to tell the story and passion for wine of the inspiring Fernanda Ramos Amorim.

Why did you set up the Wine Museum Centre here?
Indeed this is not where it began. It began in the Burmester warehouses, in Vila Nova de Gaia. At that time, Burmester was ours and, since I already had a museum in Grijó and already possessed many pieces related to wine, my daughter asked me if I wanted to set up a museum at Burmester. The conditions were bad, but there was a kind of cellar and I managed to create a museum, on a small scale, but I still put a lot of things in it.

Was this many years ago?
It’s been 15 years, or so. I created the space, and it stayed there. In the meantime, whenever I came across wine-related pieces, I would buy them. In some cases I didn’t even know what I was buying. One day a man called me and said to me, «Look, I have a number of pieces here that are in a box, but that are from a laboratory, and part of them comes from the Port Wine Institute». To start with I said that I did not want anything, because I already had so much stuff, but then I began to reflect, and said to him, «Well... I don’t want anything, in fact, but something like this might be very useful, I will keep it in boxes», and that’s how it ended up.

You were holding onto it...
Yes. Meanwhile, Luísa (daughter) was all excited, we sold Burmester, and we dedicated ourselves more to Quinta Nova. Then she said, «Oh mum, the museum has to leave Burmester, because it has already been bought by a Spanish company, and we are going to move everything to Pinhão». From then on the laboratory was developed, as it came from there.

And that’s all we find here at the Wine Museum?
Yes, it has nothing more, nothing less. Whenever I came across another piece, I would buy it. Everything that was related to the laboratories, to wine and, thus I was adding to the collection. Then we had to leave Pinhão.

And you had to find a place...
I had to store the museum somewhere, because I wasn’t going to part with these pieces.

And so its doors opened in August in Quinta Nova...
It was meant to open on July 15. Unfortunately, my husband passed away and his funeral was on that day. We did not have time to open it and so we opened in August.

What can visitors expect to see at the museum?
They will find the countryside. It begins with the countryside, the agriculture part: the vineyard is the first thing. Then everything that has to do with agriculture: the sulphur part; the ox cart; the man harvesting the grapes – he is dressed de rigeur; the celebration part, the main musical instruments, also portrayed through photography. Then follows the press - it is an age-old press, which came here after being in the house that belonged to the monks. Then comes the part of the winery and the storage: everything to do with measures, which is part of the wine tasting. This is followed by the part of the laboratory: it has a very important catalogued book - it is a sales book for parts and everything is listed, and I have pieces here that match what appears in the book, and some are even original. This little stove for example.

And the book?
The book is from 1981. It’s about wine, but more about the laboratory. I have another, an older one there, it’s from 1917. It was found in the rubbish by an employee who asked me, «Does this interest you?» and I replied, «Of course it interests me!».

Continuing the presentation of the museum, now we are in the cooperage...
This part was set up by a cooper because I don’t understand any of it. He came here from Pinhão. Here we have the stove, which is also very old and was used to heat the moulds, which were then nailed to the cask. Here, everything is wood, handmade by an artist.

And now follows the bottling process...
It’s a spectacle, putting the labels on. The hat is fun, the little bag, those socks, the bags...

And do you know where every place should be?
Ah, yes I do! I have photographed everything and I notice straight away when something is not in its place.

Where do the pieces come from?
Most are family things. Old things, from my grandparents.

Do they all come from Portugal?
Yes, yes. I haven’t bought anything from abroad.

Is there one that is more special to you?
The oldest one, the press.

And your passion for winegrowing, where does this come from?
Ever since I was 13 years old, or so. I had an elder sister, by almost five years, who very much liked old stuff. She would go shopping and I would follow her. I would be given birthday money, and I would buy bric-a-brac, as well as antiques. Later, when we bought Quinta do Mosteiro, in 1980, because it was old, I wanted to furnish the house. I started with the kitchen. Of course the kitchen was made from scratch, but the oven is the same, and there are other things there that have never left there. At one point my husband said, «It’s becoming impossible, this kitchen looks like a museum, soon it will just be annoying», and I said to him, «You're right, even I think it’s all too much». In the meantime, my daughters went on holiday, all three of them, and I was left on my own. So I thought, «What can I do to entertain myself?!». I spoke to my husband and he said, «You're crazy». But I had a big space there, in Grijó. Then one day he had to go out and I, in a spirit of «it’s now or never», by the time he got back, it was already done. And so it was. He came back and saw the space finished. I started with just one room, which at first was where the animals slept... That’s how the Museum in the Quinta do Monteiro began to take shape.

And what would he think about the Wine Museum?
Unfortunately he never got to see this museum, but he still collaborated with me. In fact, he was the one who gave me the museum.

Will there be another museum in the future?
Agh, I think now that I will not do any more. I’m doing a mini-museum there in Mr. Amorim’s office. Something personal, which I’ve already started. I want to  put his things on show: I have all his outfits, from when he got his PhD in America; I have another for wines; the hat of the brotherhood, and of another brotherhood, with another cape; I’m going to put his glasses there; his briefcase; his pens; all his things. My daughter goes there, she uses the office, but she does not touch anything, so everything is the same as he left it. There are many books, and whenever I get one dedicated to him I put it there. It will be a more personal place, for the family and some special client to visit. I’ve always accompanied him; I was almost his private secretary, ever since we were married. I accompanied him a whole lifetime.