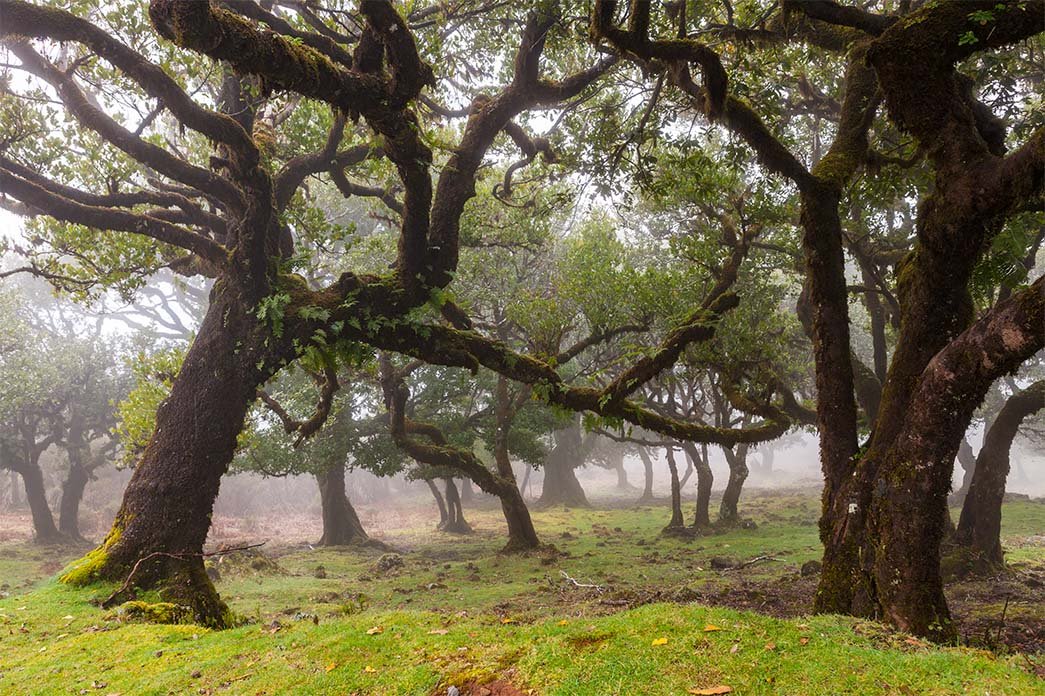 Legend has it that when the Portuguese navigators discovered the island, in 1420, they were amazed by the extensive and dense tree line. This was probably the reason why they gave it the name «Madeira», meaning ‘Wood’. The Laurel Forest, which can be admired today, is the remnant of a primitive green that has resisted five centuries of humanisation. It is a forest that is subtropical in nature, with high humidity, consisting predominantly of evergreen trees and shrubs, with dark green leaves that once occupied the entire area of the now Mediterranean basin, Southern Europe and Northern Africa, a relic from the Tertiary period, 20 million years ago. However, the last Ice Ages led to its disappearance on the European continent, surviving only in the Atlantic archipelagos of Madeira, the Azores and the Canary Islands.
Today, Madeira’s Laurel Forest occupies an area of 15,000 hectares (representing 20% of the island’s total area): on its north-facing slopes, lushly and verdantly covering the steep slopes and deep, cliff-lined valleys of the remote island interior. It is essentially located on the north coast, from 300 to 1300 metres in altitude, and on the south coast it persists in some difficult to access places, from 700 to 1200 metres. This forest group represents the most extensive and best preserved laurel forest of the Atlantic islands.
A great biological diversity lives in it, with a high percentage of species exclusive to Macaronesia, a region formed by the archipelagos of Madeira, the Azores, the Canary Islands and Cape Verde. It has its greatest expression in the high areas, where its largest and best preserved patch can be found, having been considered as a World Heritage Site by UNESCO in 1999.

It is one of the habitats with the greatest diversity of plants per square metre in the world.

Included in the Madeira Natural Park area, it is thus protected by regional, national and international legislation. It is a priority habitat, designated Macaronesian Laurel Forests, under the European Union Habitats Directive, and the most characteristic species are also directly protected by EU directives. It is also a ‘Special Protection Area’ and, for this reason, it was established as a Natura 2000 Network site, under the name Laurel of Madeira. Its Portuguese designation, Laurissilvai, comes from the fact that it is mainly composed of trees from the laurel family. It thus derives from the Latin Laurus (laurel) and Silva (forest, wood). It is a forest that produces water, hidden precipitation, visible in the quantities of levadas [manmade irrigation channels] on the island. Another curious fact: it is one of the habitats with the greatest diversity of plants per square metre in the world.
One of the best ways to get to know this fantastic environmental heritage is to walk along the paths and levadas that cross this swathe of green, some of which are on the list of the region’s recommended hiking trails. Many people venture out on these paths every year, blown away by the pleasure of discovering a forest as beautiful as it is ancient.