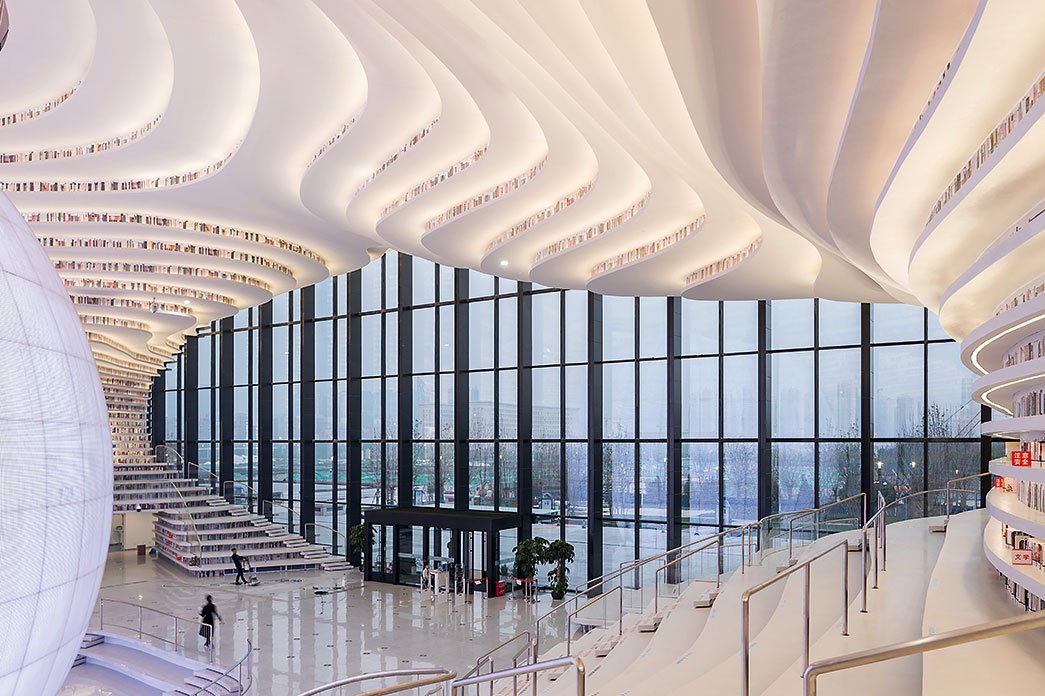 Opened for the first time on the first day of October, 2017, this is already one of the most visited places in China. Tianjin Binhai Library is located in the municipality of the same name (Tianjin Binhai), a coastal metropolis of China, and also commissioned by this public body to Dutch architecture firm MVRDV, which designed it in collaboration with the Tianjin Urban Planning and Design Institute (TUPDI). The library is part of a larger project, designed by GMP architekten, which will create a cultural district in the city of Tianjin, and which was designed and built in a record period of just three years due to the short time schedule imposed by the municipality. Located next to a park, it is one of the five cultural buildings connected by a public corridor surrounded by a glass canopy.


It is hard to believe that this is not a virtual set for a science fiction film, but the Tianjin Binhai Library is quite real. This library, or cultural centre, covers 33,700 sqm and inside it, right at the centre, it boasts a luminous sphere, which, in fact, is an auditorium with room to hold 110 people around which bookshelves, from floor to ceiling, are positioned in a cascade. This giant sphere, or the whole, has often been referred to as «The Eye», for obvious reasons. The undulating bookshelves, with room for more than one million books, are the main spacing device of the building and serve as much to frame the space, as to create stairs, seats and ceilings in layers. These contours also run along the two glass facades that connect the library to the park and the inner public corridor, serving as ‘shutters’ to protect the interior from excessive sunlight, while also creating a bright and evenly lit space.
The undulating bookshelves can hold more than a million books.
With five levels, the first and second floors are dedicated primarily to reading rooms and lounge areas. The upper floors have computer rooms, meeting rooms, offices, audio rooms, and two rooftop patios. There is also an underground area for service, storage and filing spaces. Due to the tight deadline, an essential part of the concept was discarded: access to the upper bookshelves of the spaces positioned behind the atrium. This change was made locally and at the last moment, against the advice of the MVRDV, and has made access to the top bookshelves currently impossible. The full library project may one day be completed, but until then there are perforated aluminium plates printed to represent books on the top shelves. Cleaning is done via ropes and movable scaffolding. This is the second project from MVRDV created in Tianjin and has achieved two-star status in the Chinese Green Star efficiency label.
Since its opening, the Tianjin Binhai Library has enjoyed great success in the media all over the world. Reviews describe it as «Ocean of Books», «China’s most beautiful library», «sea of ​​knowledge», «Super Sci-Fi» or simply «The Eye». But more importantly, it is about being the urban living room it was designed to be, a place designed to stimulate different uses, such as reading, walking, meeting, discussing and... being dazzled.