«I we had delayed [re.Covid-19], it would have been disastrous » 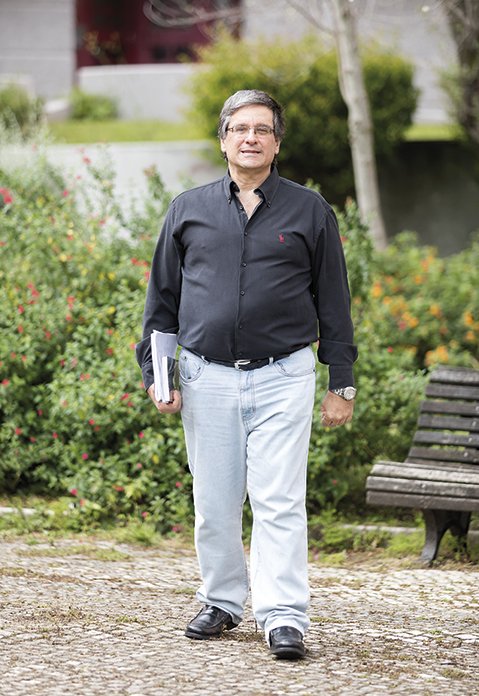 A trained physicist and mathematician out of fascination. Jorge Buescu, who is a professor at the Faculty of Sciences of the University of Lisbon, became known to the general public thanks to his analyses, which warned of the evolution of the new coronavirus disease. To reach his conclusions he used two methods: a phenomenological approach and mathematics, based on Dynamic Systems – his speciality – using some applicable models, in the treatment of the variables of this pandemic.

When did you first come to understand that this virus was exponential?
My initial concern come from my scientific training: my research area is Differential Equations and Dynamic Systems. And because of that, I started following the outbreak, in January, through the figures from China, when we started to hear more news. I realised, from the outset, that it would not be something to take lightly.

But at a certain point you had to do the maths again?
I saw I had underestimated some parameters. For example, the Ebola virus, which has a very high mortality rate, kills its hosts and kills itself. Here, we have a virus with epidemiological characteristics that allows it to spread, and in an invisible way. There are many asymptomatic carriers and so it spreads silently, almost without being noticed. And by the time you start testing the population it’s already spread a great deal. The initial spread, which is exponential, is a chain reaction, like a nuclear bomb exploding, only instead of lasting microseconds, it takes days. It is this combination of factors that makes this virus so explosive.

«I started following the outbreak through the figures from China»

And this fact is what caused so many deaths.
That was one of the factors that I also underestimated – the failure of the health services. As a mathematician, I calculate things just by looking at the numbers. Imagine that 5% of the infected, in a million, contract Covid-19 and go into intensive care... That’s 50,000 people at the same time. No health care system can take it if the disease isn’t controlled.

Do you think preventative measures were implemented in Portugal in time?
I have no doubt that they were. If we had delayed, it would have been disastrous. We had to act and act very quickly. This time, we had the great advantage of the delay, in relation to Europe, and we were able to look at the rest of the continent and realise that this was that nuclear bomb in slow motion. The virus was spreading even if you couldn’t see it.

After organising the parameters, how did you build your charts?
I worked with two formulae. The first, phenomenological, is to take the numbers from the Portuguese Health Authorities and work on them in order to reconstruct what is happening behind them, and this is done without looking at other aspects. I assumed they came in a black box, the origin of which was unknown to me. The second approach, which I also used, is to have a mathematical model, to have equations that describe differentials, that describe the system, and to apply to this the values of the parameters that we observe and try to predict what will happen in the future. These are two different perspectives, one of them is to take the real numbers and look back and try to look forward as well, and the second is to take the values that we have and put them in the equations and try to see what’s going to happen ahead of us.

«Mathematics takes you to another world»

In terms of the future, what does your data tell us?
In terms of the future, my data says it all depends on what we do. We are fine, in the sense that we have a stable situation; we have managed to ensure that our health services, in terms of hospitals, have been able to cope. We have closed all the taps and valves in order to contain the expansion and we have managed to stabilise the situation. I would say that we have no room for manoeuvre, we cannot make mistakes, if we make any mistakes through prudence, if we make too many mistakes, we will very quickly reach the level in which the health system breaks down and that would then be a tragedy.

Mathematics is your life, what does this science mean to you?
Mathematics takes you to another world. It’s always been a huge passion for me. It’s like art. It’s like going to an opera or to a major exhibition, where you are suddenly whisked off to another universe. Mathematics isn’t numbers, it’s ideas. And ideas are what I work with. To play with ideas is to take hold of objects, which are in a kind of platonic universe, far away, in an ideal place, and mentally turn them on their head, inside out, to see what they look like, what properties they have, what consequences they provoke in us and so on. This is what mathematics is about.