«You cannot view the country equally» 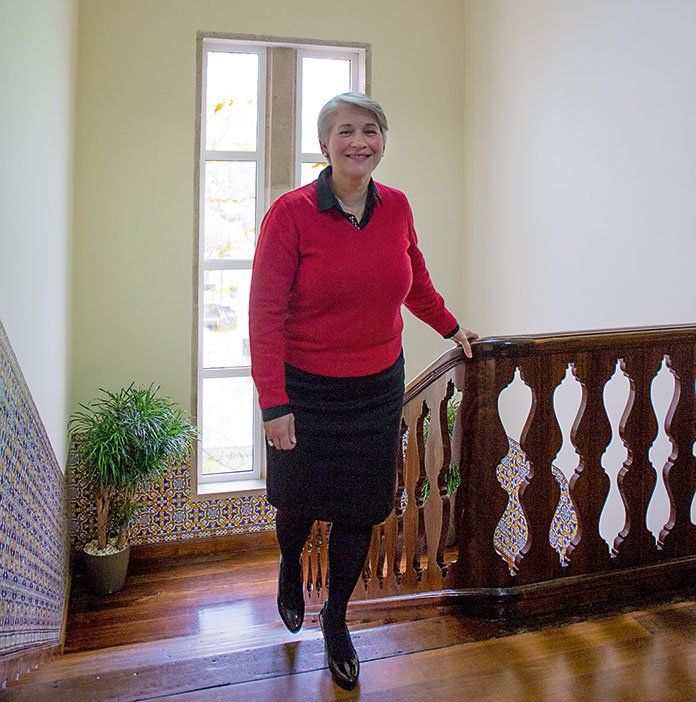 No! No! No! This is professional role she is required to play. Sitting at the desk where «no» often rings out louder than the desire to say «yes», Maria do Céu Quintas, mayor of Freixo de Espada à Cinta, chatted with us about her time in Mozambique, the place she was born, and of which she has beautiful memories, and she also talked about her political life. She is demanding. Friendly. Captivating by nature. Always with a smile on her lips. Maria do Céu is at the helm of one of the municipalities of Portugal’s interior, and while the questions were being asked, it was easy to see how this woman relishes the political challenge facing her.

What memories do you still have of there?
Good ones, very good ones (she laughs). I was born in Vila Pery – now Chimoio – and when I was three years old, I went to live in Manica, which was very close to the border with Rhodesia. I attended school until the 1st year of the ciclo (what you’d call year 5 today). I came to Portugal in 1974.

Have you ever been back to Mozambique?
No. But I would really love to go back there, to show my family where I lived.

Do you remember playing with children there?
I remember. There is so much that is still so vivid. That’s why it’s sad to go on to Google Maps to try to see it and realise that it is badly damaged, that the streets have no tarmac... Differently from the past. It was a town like Freixo; small, but it had everything.

And then you came here (Freixo)...
When I got here, my parents and I went to Lagoaça. And, as we entered that village, and saw all those low houses, all out in stone, my reaction was very bad. As soon as I got to the entrance of that village, I said to my father: «I’m not staying here!»

You don’t think that way now though?
No, perish the thought! I wouldn’t change this for anything. But it was the shock, the contrast, there was just no comparison. Then, for a long time, and even today, I don’t speak much about my childhood, because people didn’t understand very well. There was that thing of «you’ve come back» thing. No, I haven’t come back, I’m a refugee, I haven’t returned – because I was born there – but that’s what they were all called: ‘returnees’.

What caused you to study management?
Ever since I was little, in Mozambique, I had been influenced by a lady who worked in a bank. My father would send me to the bank, with his messages, and I loved going. There were men working there, and a single young woman, who was Luísa, and I, I don’t know why, would look at her and imagine myself there, like her. I remember one night the manager of the bank, Senhor Ferreirinha, was at our house (Mozambique) and I told him: «When I grow up I want to go to work for the bank like Luísa», and my father saying no, and me saying yes! I cried my eyes out because my father was against me.

Even going against your father’s wishes, you studied management?
I was a bank clerk. When I was in Freixo, giving classes the Caixa Geral de Depósitos advertised a job. Well, I applied and I got the job. I was chosen from the 48 applicants.

Did you see yourself in Luísa’s shoes (from the bank in Mozambique)?
Yes, because I was the only woman there, in the middle of men.

What did your father say?
My father was very happy because I got where I wanted to go and he was very proud of me.

Maria do Céu showed him that she could do it...
Yes... (she gets emotional).

You left banking for politics...
I never imagined reaching retirement having always done the same thing. In the meantime, a few years ago, at a change in term of office, I thought about what was going to happen «this mayor is going to ruin everything». Because until then the council had a very good financial department, and then he (the new mayor) started screwing everything up. The council’s financial department started to get in a very bad state, and now it will still take some time to recover. It was that state, and the desire to do something that got me excited about politics. In the 2009 local elections, the PSD candidate invited me to be on the Municipal Council list, despite me having no ties with the party and at the time supporting the ‘other side’. In these circumstances I had to make a decision, but always from an honest perspective, both with those who were inviting me and with the people on the list to which I belonged. I was adamant: «I have been made an offer and I am going to accept it». Everyone supported me. We held the elections. We didn’t win, and I was four years in the opposition.

And then?
Then I ran for mayoral office! The former candidate and mayor told me he wasn’t putting himself forward again. In this context I was assertive: «if you’re not doing it, I will! I ran, and I won!»

And how has the experience been?
It’s like this: I was fully aware of the state the council was in, but I understood that I had to do something...
«If anyone wants a place to relax, to get out of the city, they can come to Freixo de Espada à Cinta» 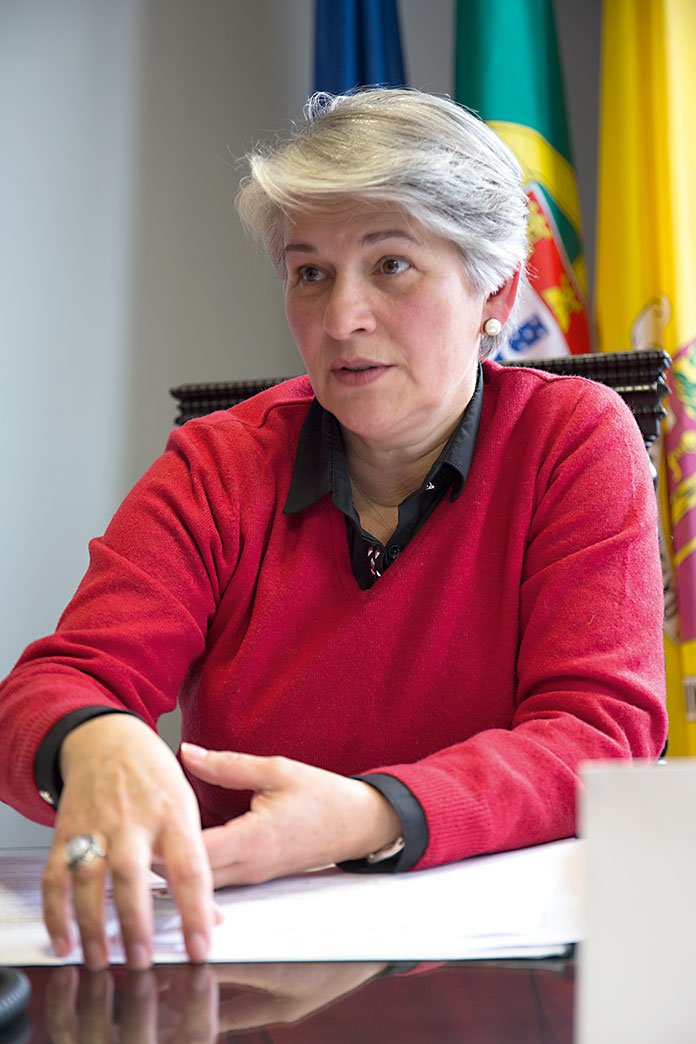 Is your commitment to the council being honoured?
Yes. We’ve already reduced debt by five million. The revenue of this council is the FEF (Financial Equilibrium Fund) only. And 86% of the FEF is for salaries and loans and, even so... When I took office I knew the council was in bad shape, I knew, but we had to do something.

What efforts are you making to boost Freixo?
Through events that take place almost right through the year. We have reformulated concepts, such as the Cross-Border Fair integrated in ‘Almond Trees in Blossom’ and the Sopas e Merendas (Soups and Picnics) culinary event focusing on the municipality’s traditional cooking, and we have created three events from scratch: the Medieval Market (2016), FFIL (International Book Festival of Freixo), begun in 2017, an event like no other in the interior and of four events of this kind to be held in the country. And finally the Iberian Wine Fair, associated with the Jornadas Gastronómicas do Bacalhau, a food fair focusing on codfish. This wine & food event – includes wines from demarcated regions, namely the Upper Douro and Spain. The idea is to promote the Freixo brand, through what is endogenous and through culture. With this strategy and management mentality, Freixo has made its mark!

Is this a way of bringing people here and showing that the interior is not forgotten?
There is much to offer here; there is quality of life here. If anyone wants a place to relax, to get out of the city, they can come to Freixo de Espada à Cinta. We have scenery, heritage, food, wine...

Imagine, for example, a hotel chain were to come to the region…
I would make this appeal at any time. We have many dilapidated houses that I would like to see renovated. The council has no means to do it. This would be a good venture for investors coming from abroad.

What other attractions are there here for visitors?
Silk, for example. Freixo is the only place where handmade silk is produced, from raising the animals, to extracting the thread, and then weaving it. I believe that silk can be an asset in Freixo. That people could make a living from it. And the art of shoemakers (Freixo boots) this will also be taught to new apprentices.
«The Spanish market brings lots of life to Freixo»
From the national and political panorama, what do you have to say?
You cannot view the country equally. It is not that nobody is more than anyone else. I don’t feel any less than those in Lisbon. But the country has to be looked at according to the situation it is in. You cannot expect taxes to be the same in Freixo as they are on the coast. We are seeing an obsession with an arithmetic model, which leads to the function of the state being forgotten or even scorned at! Not enough people to create revenue? Shut down the services! That just shouldn’t happen. A centralist mentality and centralising practices prevail! In this matter, central power is very much to blame for the state we have come to. Accordingly, how can the interior defend itself and develop? I would say that the path to take, although it isn’t enough, is this one: the people that the state takes from us with depopulation or removal of services, we make up for with what we offer in terms of tourism and leisure! We’re tough!

People need to be given better conditions, is that it?
In our municipality, 93% of the territory belongs to the Douro International Nature Park. And all these services are based in Braga. How can this be?!

What role should the local authorities, for example, play and demand?
Municipalities should be more involved in the decisions that are made.

Does your municipality have a good relationship with the neighbouring country, Spain?
Excellent. The Spanish market brings lots of life to Freixo. We welcome the Spanish here every day. They come for shopping, for dental consultations, and for all the food and leisure facilities we have: historic and natural heritage.

And the future, what can be expected from you?
I don’t know. The future is made of our goals in life, with the «tomorrows that sing» and with what people might expect from us. I won’t give up doing things. Our social usefulness doesn’t end with duties of office. There is one thing I am certain of: I will always help this place and these people.

Before that, you want to get the accounts in good shape in the council?
Yes. As long as there are loans... Four more years aren’t going to put this in order. Everyone knows what’s going on. I don’t hide anything from anyone. And sometimes you have to know how to say ‘no’!

Do you always have a smile on your face?
Always. But that doesn’t stop me from taking things seriously (she laughs).