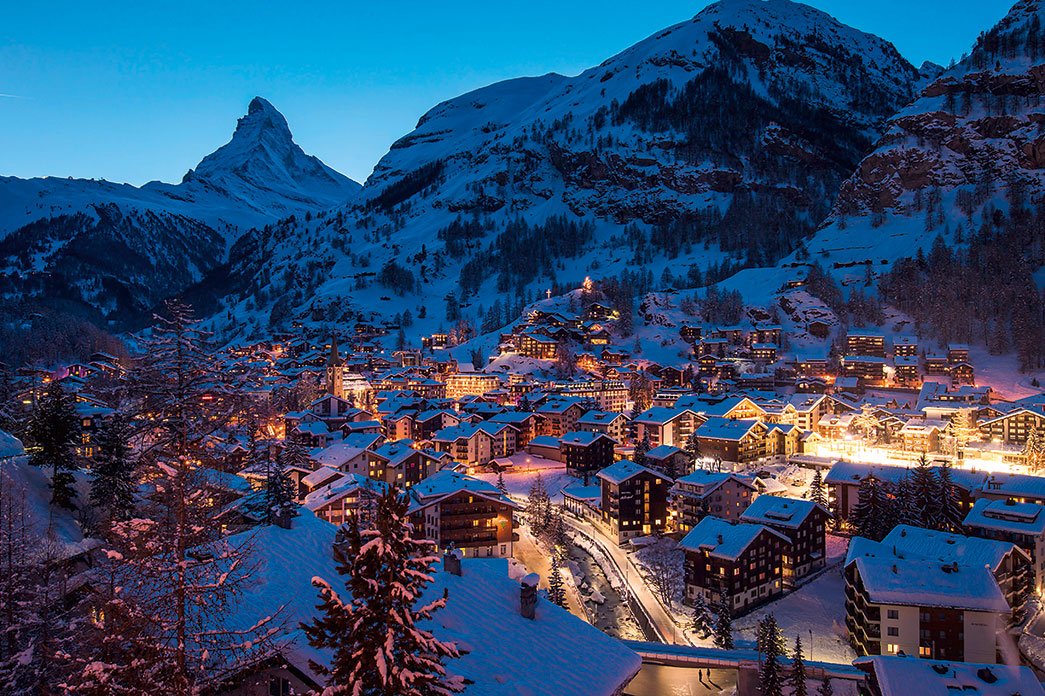 The iconic mountain appearing on the Toblerone chocolate packaging is one of the region’s highlights, but Zermatt, a Swiss town that has long been fuelling winter dreams, has over 38 peaks above 4,000 m, as well as stunning cliffs that make you feel tiny before the grandeur of nature. The constant blanket of snow during the winter months gives away its location: the heart of the Swiss Alps in the Canton of Valais. Close by, the towns of Täsch and Randa and the border with Italy.


Zermatt lies at an altitude of 1620 m, but its efficient transport system, including trains and cable cars, takes you in just a few minutes to the summit of mountains with sweeping views. The town has just under 6000 inhabitants (2016), but its facilities, which include about a hundred hotels and an equal number of restaurants, compete with large cities. Surrounded by exuberant nature, Zermatt always features the Matterhorn in its postcards (which is also always present on the packaging of the famous chocolate), a great pyramid-shaped crag rising up 4478 m and covered with snow 365 days of the year, which has also become the symbol of Switzerland.
The region – also recognised for its environmental credentials – boasts 360 km of ski runs, which in summer give way to 100 km of bicycle tracks and 400 km for hiking. Cars are banned from the centre of the town, for environmental reasons, of course, and also because the lanes are narrow and winding. Only bicycles and small electric cars can be used here. Embellishing the steep morphology, there are charming alpine-style wooden houses, inviting you to explore every corner. At every turn, a new scenario, as if you were in a fairy tale.
Gornergrat is one of the most visited mountains in Zermatt. The Alpine panorama and the glorious view of the Matterhorn make the trip unforgettable. The Matterhorn Museum is well worth a visit, as are the streets full of boutiques, souvenir shops, cafes, bakeries and restaurants. And you should take time to walk, cycle, ski, trek, snowboard and… breathe the fresh air of the Swiss Alps.