«What fascinates me is the act of creating» 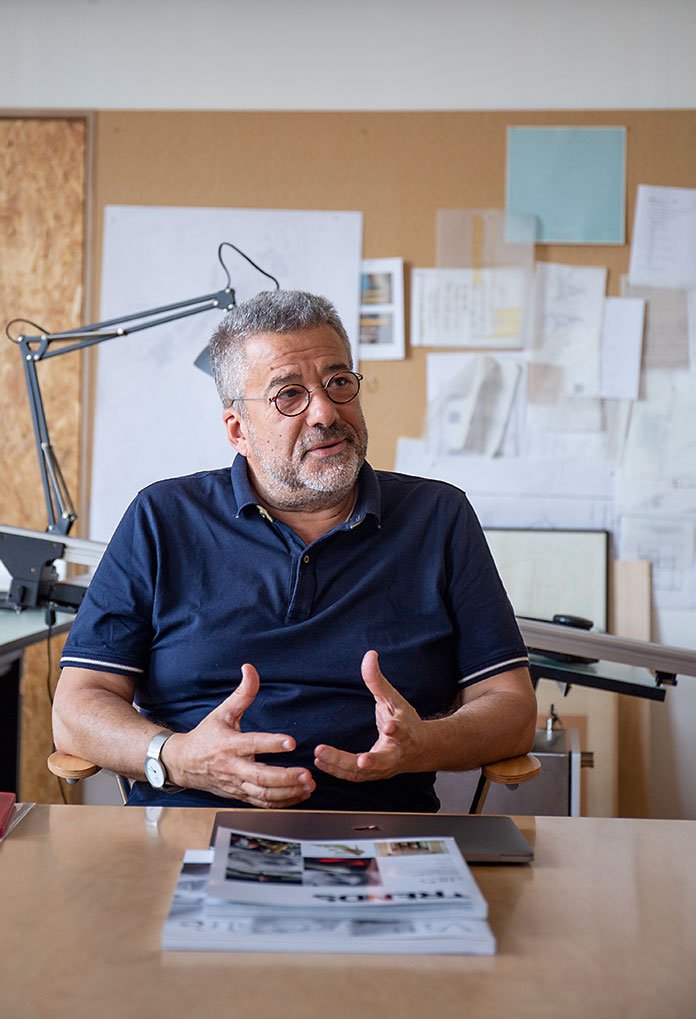 For many years he lived in the Netherlands, but when he was asked to get involved in Chiado, following the fire, Carlos Castanheira ended up staying in his country. The awards he has received have triggered numerous invitations to do projects abroad, especially in Asia, where he has worked primarily with Álvaro Siza Vieira on ‘Pharaonic’ projects, although he also likes smaller scales, because the challenge of thinking things differently is interesting. He confesses, however, that the awards cause him some annoyance because they spread him out into other activities and what Carlos really likes is to do architecture. Always with a keen sense of humour, he tells us about projects connected to the wine industry, in particular the Casa da Torre, at the Quinta da Faísca estate and a recent project for the Amorim Group. He has never designed a hospital – he reveals – and one day he has to do a tower!

When you were young, was architecture already part of your plans?
No one in the family had anything to do with architecture. But I was always very interested in seeing things under construction. I found it interesting. I also always really enjoyed playing with Lego and those kinds of building toys, and drawing. If I could go back, I would take the same route. What fascinates me is the act of creating, giving comfort and pleasure. I like to do different things, to be involved in very big projects, but also small ones, and this challenge of thinking things differently is very interesting.

Tell us about two projects, one small and one very large, which were challenging.
When they called me to see the site for a 72,000-sqm project we are doing in China, it was a little scary, but then you gain in courage and «let’s make this happen!» It’s a different thing to do a small house, or a small extension, like the one we just did for a few offices at a factory, which is also stimulating.

This project in China was the one you developed with the architect Álvaro Siza. How do two heads think up a project of this size?
It is common for me because I have been doing this for many years, but it takes mutual respect, the same respect I have for my employees. There is no one who does a job alone, except for rare exceptions. Nowadays projects are developed in collaboration. This project in China, The Haishang Museum, is ready and work will start now.

When did you found Carlos Castanheira Architects?
I founded the firm with a partner, who is my wife, in 1992. I was in the Netherlands for many years and when I was tasked with doing the Chiado plan, following the fire, I came back on a six-month contract, but ended up staying.

Given that it is a very peculiar building, what were the main challenges involved in the ‘Building on the Water’ project, which you developed with architect Álvaro Siza?
It was very challenging, but we had a lot of support from the clients. It involved building offices on top of a factory that measured 2 km by 2.5 km. As the budget was large, it allowed us to instil the project with some class and substance. That was a Pharaonic work. It is a brutal structure, with nine-metre pillars and huge foundations. Personally, I had never done a serious building on water. There had to be the idea that the building was floating and that it was very different from the factory’s image. The factory is an interesting yet very industrial building, not necessarily beautiful.

What do the awards you have received mean to you?
For a long time I did not value this question of awards and publications. I was very focused on working. Little by little I came to realise that the clients themselves are pleased when a given building I have designed wins an award. Winning an award is, as the word itself says, recognition, but at the same time it is also a bit of a hassle, in the sense that we are then often asked to do other parallel things. Some people like it more, some people like it less, what I really like doing architecture. The big change that the awards triggered was in 2006, when the first invitation to go to Asia to do a job appeared. It was on this first trip to Korea that larger projects began to appear, which really meant having more people, a bigger team. And it’s hard to deal with people. Computers ‘don't break’, but some people arrive already broken (he laughs).

Some of the awards you have received relate to building projects whose main raw material is wood. Do you have a particular fondness for this material?
This is something that comes from school. At school, once, when talking with the professors, I realised that I has no knowledge of wood, both in its living state, as trees, and in timber, already cut. So I took an interest in wood. I started to slowly do work in wood, and the first major project I did was my house and the dialogue was very easy with the client. The only problem I had is that he didn’t pay me (he laughs).

«Wineries are changing and there’s no room for dust or cobwebs anymore». How did the Casa da Torre Winery project do things differently?
Before accepting the Casa da Torre project, I had visited a winery in Bairrada. When people visit it, it is said that the owner, in the old days, paid anyone who brought cobwebs, because it was the most natural way to catch mosquitoes. Nowadays with the rules that are in place, there is no place for such things. It’s all stainless steel, the procedures have to be super hygienic, you can’t have dirt floors anymore, or granite vats. The Casa da Torre was something new for us and the client is exceptional. There was already a cellar there, in a bad state. The client asked us to design a winery above the existing one; we had to keep the winery there and could only demolish it at the end, because there was wine inside it. The estate is very beautiful and I find it interesting how we placed the winery in the land and also the fact that it is a winery making wine with gravity. The result was to create a winery as if it had always been there.

Did the Quinta da Faísca Winery meet the client’s wishes?
Quinta da Faísca was also a legal-technical necessity. They had a winery, but it was not in the right conditions. They had to make a new space, in which, more than in Casa da Torre, the intention was to have a wine tourism part and a wine storage part, where the wines age, which is the part that is buried. They are different projects, but what I like is that the goals have been achieved.

Speaking of clients… what is the ideal client?
The ideal client is the one who wants to work with us, which is critical, but in a positive way… and that pays (he laughs). There are some clients who sometimes ask for really odd things, which we sometimes do and sometimes refuse to do. These we can add to the list of those who are not good clients (he laughs).

Do you believe that creating an iconic building for the wine sector helps to make the brand more visible?
I would say that, nowadays, if you do things differently, you don’t sell. I have another project that is under construction, but for a large group, the Amorim Group, which involves a winery in the Dão region, which is huge in size. The official opening takes place next Easter.

Are you a wine connoisseur? Does this help you in any way when designing a winery?
I like good wine and I think I know what is good and what is bad. But I am no expert. And I like to give my friends wines from my clients to drink. But we have to be professionals. I may not practice a particular religion, but that does not mean that I wouldn’t be able to design a church or temple. Wineries are projects like any other. There are clients who show up and we have to study the programme, the conditioning factors and provide an answer. I can not be a wine connoisseur and design a winery. But if we are in a more familiar environment, it can help.

Apart from the architecture and the many business trips, what do you like to do?
One of the things I enjoy doing most is being at home, because I’m rarely there and it is almost my escape, it is my territory, it is where I feel very good, especially when I can be outside the house. I think it’s fantastic. When I go on holiday, I can’t turn off my architect status. Sometimes it’s a little tiring, because I find myself studying what is well done and what is poorly done. I have gone more to see a lot of architectural things on holiday trips. Now I just see what’s at hand, the main things.

Are there any projects you would still like to develop?
I have never done a hospital. I love doing hotels! I would also really like to do a tower. It is a type of project that is not very valued, but it is of great complexity.