«Angola is my inspiration!» 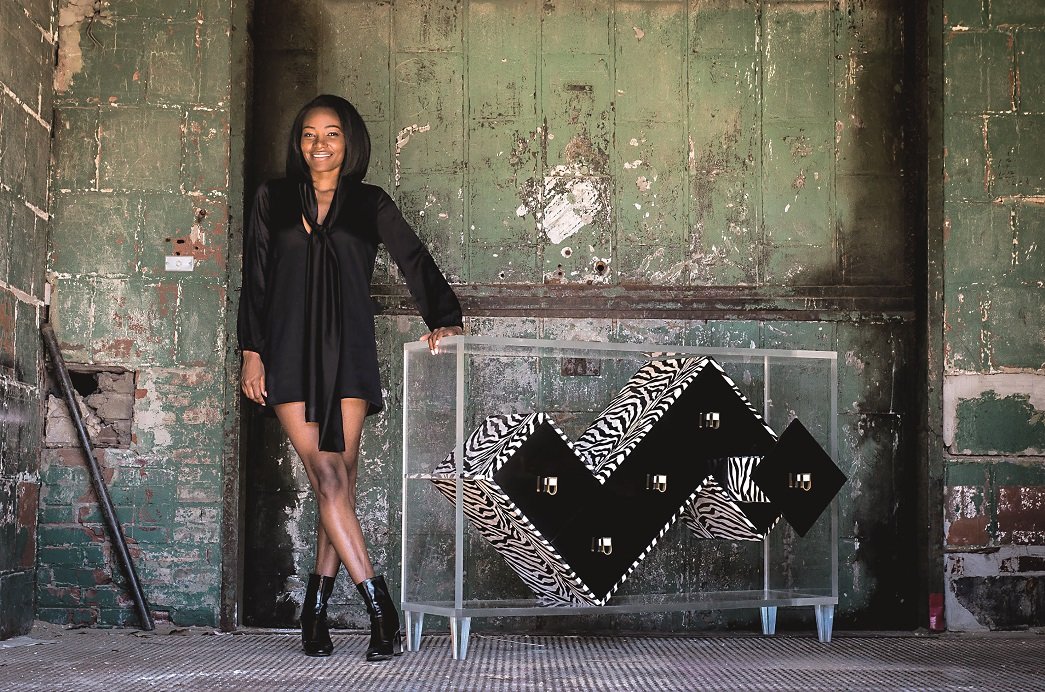 She was born and raised in Luanda, Angola. Proud of her country, but with aspirations to go even further, Indira Lourenço went to the USA to study Chemical Engineering, but soon came to realise that it was through art that she could honour her natural talent and her country. She took Interior Design at the New York School of Interior Design and shortly after founded I. LOU. Living in the USA, but with Angola in her heart, Indira creates collections of artistic furniture that combine the tradition of African culture with the modernity and lightness of Scandinavian design. The designer has enjoyed standout appearances in respected publications, has been invited to participate in major exhibitions and has already been given the 2017 Excellence for Young Designers Award, as well as being nominated for the 2018 ASID National Award.


Where were you born and where did you spend your childhood?
I was born and raised in Luanda, Angola.

How did the USA first come into the equation?
I flew for the first time to America with the intention of studying Chemical Engineering, bearing in mind the natural wealth of our nation. After a year, it became clear that I would have to change course. Not because my affection for my homeland had changed, but because I could see that there were other ways that were more natural to my skill set and with which I could express the inspiration that Angola brings to me. With this in mind, I moved to New York to study Interior Design at a renowned teaching establishment (New York School of Interior Design), and stayed true to my skill set and inspirations. Anyone who grew up with me in Luanda was not surprised by this change. As a child, I was always seen designing and changing anything. It didn’t matter if it was clothes, shoes or decoration. Anything I could make more beautiful and elegant, I would.

Did you dream of the field of Interior Design as a child then?
My passion has always been the fashion world. I never dreamed about being an interior designer. But, at that time, I did not have the support of my uncles, who raised me. They have always been very conservative. They have always believed in academic education, not only as a means of personal growth, but also as a trigger for the development of our country. Once they saw my potential as a designer, I got their support.

What lies at the origin of the project I. LOU?
It came about from an intimate desire to express my African culture in full, so as to better use my creative skills. The first collection, 45 Degrees, came about from this desire and intrinsically represents the socio-cultural realities of Angola.

Combining tradition with modernity – is this the core concept behind your creations?
Absolutely. I have always used traditional African furniture as the basis. I like to invoke the emotions of African culture and, at the same time, reveal the beauty and complexity of the continent. And the way I have found to be the most viable, following current design trends, has been to give a touch of modernity to traditional pieces.

Can we say that Angola is always represented in each of your pieces?
Angola is my inspiration! It certainly is and always will be linked to my work, even if subtly, whether in lines, colours, or materials. I am very proud of my origins and the inspiration that they give me.
«I like to invoke the emotions of African culture and, at the same time, reveal the beauty and complexity of the continent»
In addition to Angola, what inspires you the most?
I combine African influences with the lightness of Northern Europe. These countries have a long history in the fields of design and art in general and are known for the simplicity and elegance of their designs.

How have Americans reacted to your work?
One of the reasons I decided to start in America was because I knew that the development of my pieces would have more impact and acceptance here, at least at the beginning. Recently, I signed a partnership contract with a renowned international hotel and tourism company. We are finalising the prototype phase of a new collection, which I have developed exclusively for this company. I can hardly wait to share the new collection with the world!

Tell us about a piece of yours for which you feel particular pride, or that has a strong symbolism.
The Zungueira Lounger. There is in it a contrast between the elegance of the balance of the organic and dynamic lines of the seat and the strength and straight lines of the base, which represents the strength of the Zungar woman, carrying her heavy burden. The piece has an incredible visual impact and has proved very popular in all the exhibitions at which it has appeared and has also generated interest from galleries associated with university sociological museums.

I. LOU is present in New York and Los Angeles. What do you want to be and where do you want to go from here on?
My next direction will be the Angolan market, where it all started. In the near future, I want to expand my creations worldwide, and I cannot think of a better place than Angola. After that, I intend to continue to expand into the Portuguese-speaking world, including the Brazilian and Portuguese markets.