The importance of the legacy 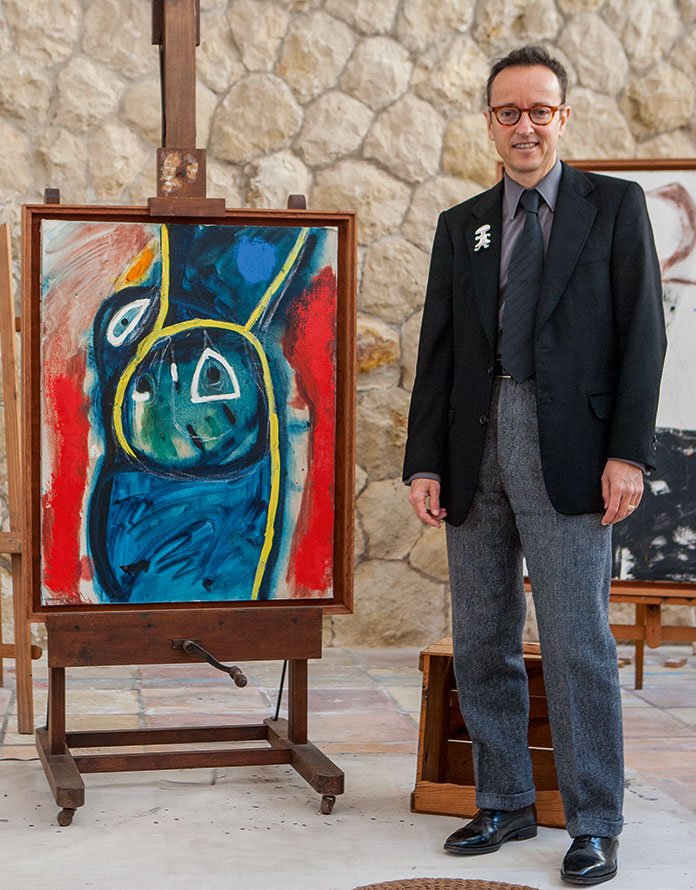 It was only when he was almost an adult, and already after his grandfather had passed, that Joan Punyet Miró, his grandson, truly understood that all those paintings, full of lines, colours and shapes, had irrevocably marked the world. Joan Miró was a famous painter, sculptor and ceramic artist. His grandson knew him. But the aura of family ties disguised the fame of a profession, which, when young, he understood little of. Although, as he explains to Villas&Golfe, he was always aware that his grandfather was different to other people. «Of course, when you live in an artistic environment you don’t notice certain details». But, some of these details, to which he didn’t pay attention at the time, have remained engraved in his memory after all. And it was with them that he managed to complete one of the largest canvases painted by Joan Miró, that of the admiration of a grandson for his grandfather.

The saying goes that you never forget what is truly important. As such, Joan Punyet Miró more naturally recalls his grandfather than the artist, from his youth. The images he recalls include «family gatherings and Sunday lunches, some afternoons on the terrace of his house, having tea, or celebrating birthdays and Christmas». It was one of these moments that he recalls an image that have never since left his head. «I recall on one occasion, when dining at my grandparent’s house, I was unable to take my eyes off him. He was absorbed in examining a chicken bone, which he had taken off his plate. To my surprise he gave it a clean and put it in his pocket. For a boy of ten years, it was the strangest of images. And it wasn’t until years later that I discovered that this self-same bone had been used for the realisation of the sculpture Chien Oiseau, from 1981».
«What impressed me most was the large number of blank canvases that he had prepared to work on in the future»
Today, he also knows that there were, after all, instants, in which he saw his grandfather and the artist, merged in the same man. A realisation that has been happening little by little, like when he was allowed to enter a space, which until then has been quietly off limits. A moment of that was so striking that even the date is worthy of being highlighted. It was on April 20, 1978, when Joan Miró turned 85. His grandson, Joan Punyet Miró, was given permission to enter his grandfather’s studio for the first time. His grandmother, Pilar, and his brother Teo accompanied him. «It was the only occasion on which I visited Miró in the Sert workshop. I recall that the colours of his works fascinated me and the smell of his studio. The large-format works were in the part furthest away from the entrance and monopolised all of my attention thanks to the colour of their backgrounds and to the forcefulness of the strokes. I recall that there were groups of six or eight small-format paintings scattered on the floor, which he was working on at the same time. I had to move about with care so as not to bump into a picture or into one of the tables, overflowing with bottles, brushes and tins of paint. Unquestionably, one of the details that most impressed me was the large number of blank canvases that he had prepared to work on in the future».
But the future sometimes has a short fuse. Today, 33 years since the artist passed, his grandson remains committed to proudly promoting an unavoidable name of the surrealist movement. From Successió Miró [a company created in 1996 to manage the rights of the works by the artist], to foundations in Barcelona and Palma de Mallorca, which work hard to promote his work through exhibitions. «In addition, among other tasks, I am involved in the publication of detailed catalogues and in processes of authentication. All this will be reinforced by the recently-created Mas Miró Foundation, in Mont-roig, Tarragona», the grandson explains.
«A collection like this, in my opinion, should be kept together. Cancelling its sale was an important step towards avoiding the dispersion of the works»
Back on Portuguese soil and more precisely in Oporto, a few months ago an issue was settled that touched sensitive issues in Portugal, those of culture, politics and money. Everything considered, the country stands to gain with the Materiality and Metamorphosis of Joan Miró, which now appears in the Casa de Serralves museum. Joan Punyet Miró shows his satisfaction with how the story ended. «A collection like this, in my opinion, should be kept together. Cancelling its sale was an important step towards avoiding the dispersion of the works, with the action of the Portuguese state exemplary. Now, the city of Oporto, in particular, and all Portuguese people, have an important legacy to add to their cultural heritage». And the importance of this heritage hasn’t gone unnoticed by the public, who, all over the world, praise the artist’s work. The secret may be in the many details. In the simplicity of the strokes, in the bright colours and in the magical person that Miró was. *