«I have the curiosity gene» 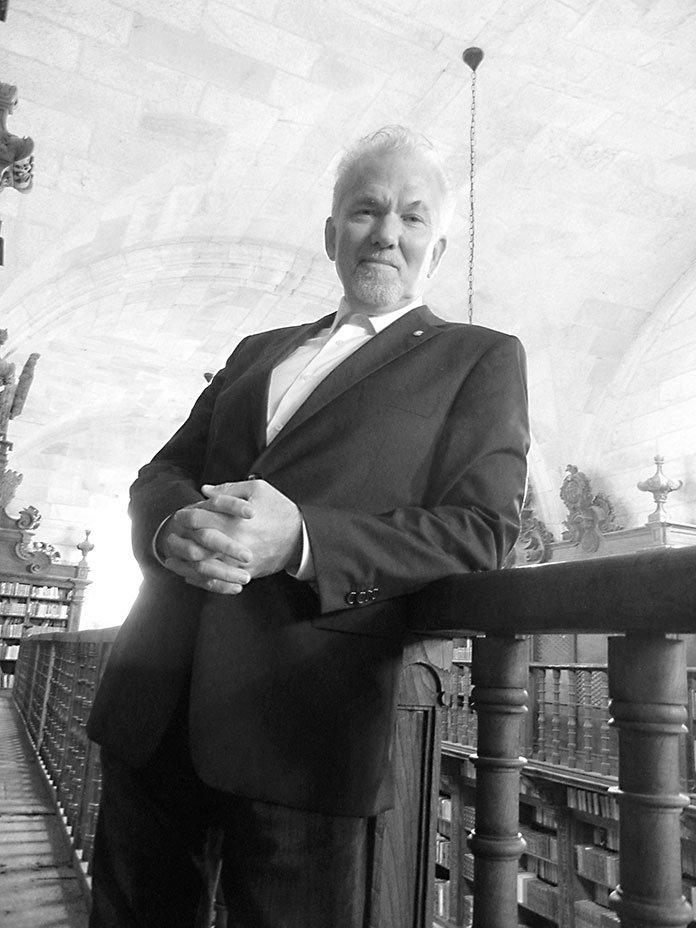 Author of four New York Times bestsellers, and maker of documentaries such as Afterlife, The Lost Years, and Dali's Greatest Secret, Perry belongs to the Order of Saint Michael of the Wing (OSMA), Portugal’s oldest order of chivalry. He has always seen journalism as the perfect job. As an editor in some of America’s most prestigious magazines, throughout his career he has chosen the path of uncovering great mysteries. «Mystery is what makes the world exiting and what makes life worth living», stresses Perry.

What led you to produce the documentary, Dali’s Fatima Secret? (In the United States the name is Dali’s Greatest Secret)
I have what I jokingly call "the curiosity gene” because I was born with a curiosity about everything. That is especially true of art. A great artist can take your mind to places it never would have gone on its own. That’s how I felt when I first saw Dali’s painting Vision of Hell. It was filled with imagery that I could not have conceived on my own, very powerful images of a hell itself and various scenarios for getting there, like war and hate, all of which lead to the destruction of the soul. I could see this imagery immediately upon looking at this magnificent painting and I had to know why Dali had used so much of his power to imagine on a painting that he was hired to paint. Usually he would not put so much effort into a work for hire like this was. But something had truly happened in producing this painting. He had become a believer in hell and that would make him a believer in heaven, too. I wanted to know what had happened – why he had become transformed – and that was when I decided that the story of Dali and this painting had to be told. 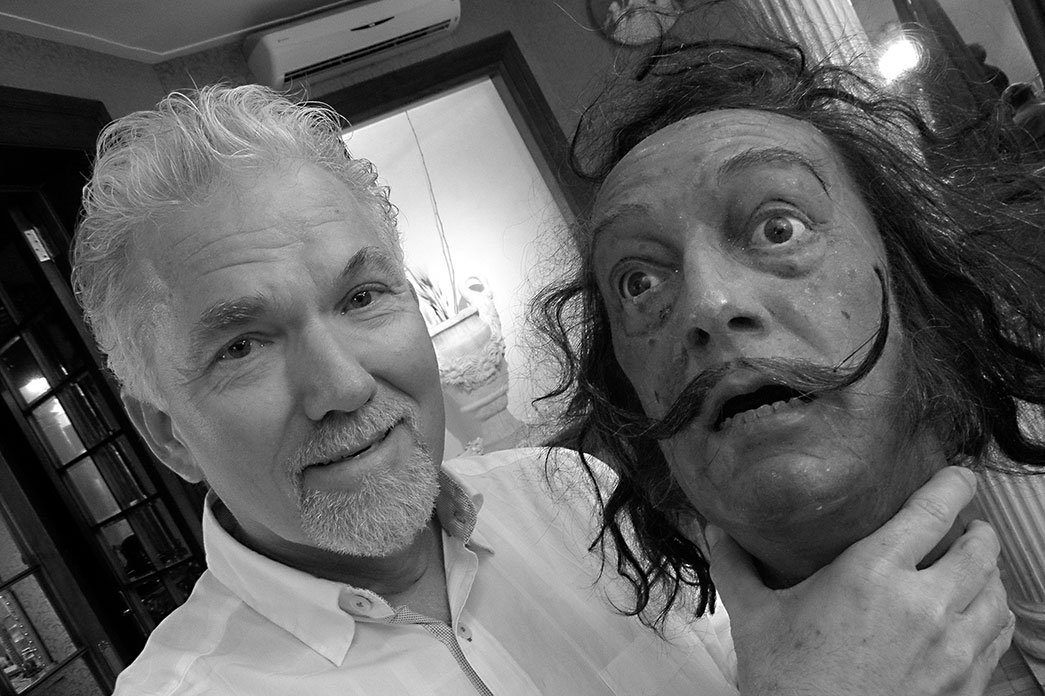 In general terms, what is this documentary about?
This documentary is the untold story of artist Salvador Dali and the ways in which his painting, Vision of Hell, had a profound effect on his life and work. It is a painting of one of the religious visions seen by three children in Fatima, Portugal in 1917, one hundred years ago this month! The painting was completed in 1962 and came at a time when he was deeply concerned about his death and was openly concerned about his mortality. He considered being cloned or even frozen  in hopes of being resurrected decades later as a means of achieving at least some form of immortality. But as he worked on the Vision of Hell, he found himself being drawn back to his religious roots. In researching this film we found that he kept his new found devotion from most people so he would not lose his intellectual and anti-church reputation. As much as anything, Dali’s Fatima Secret is about something we all dream of, everlasting life. And because he kept his transformation back to the Catholic Church such a secret, this film is a significant addition to Dali’s biography.  I am very proud of it for that reason, but not that alone. This film is an artistic and journalistic achievement!

How else did Dali’s life change as a result of this painting?
The organization that commissioned the painting, a Catholic apostolate known as The Blue Army, ultimately hid the painting underneath a nun’s bed at their headquarters in New Jersey. Dali didn’t know that the painting had been hidden and didn’t seem to care. He had painted religious paintings for many years, but after Vision of Hell was completed in 1962, the number of religious paintings he created increased substantially. There is even one painting that hangs in the Vatican’s Papal Art Galley that was painting at the same time as Vision of Hell and was clearly inspired from the same well of creative thought.  The painting is called The Trinity and it’s quite risqué for a religious institution.
But you asked how his life changed as a result of this painting. We found many photos of Dali going to Mass after this painting was completed. Often times he would sneak out of his home with his eccentric wife Gala and attend Mass in secret. In fact the former mayor of Cadaques, Spain near Port Lligat where Dali lived half the year said that Dali started going to Mass at the Church of Santa Maria on a daily basis, often times with the mayor himself. It’s hard to believe that Dali could have such a secret life, but he did according to many who lived this secret with him. 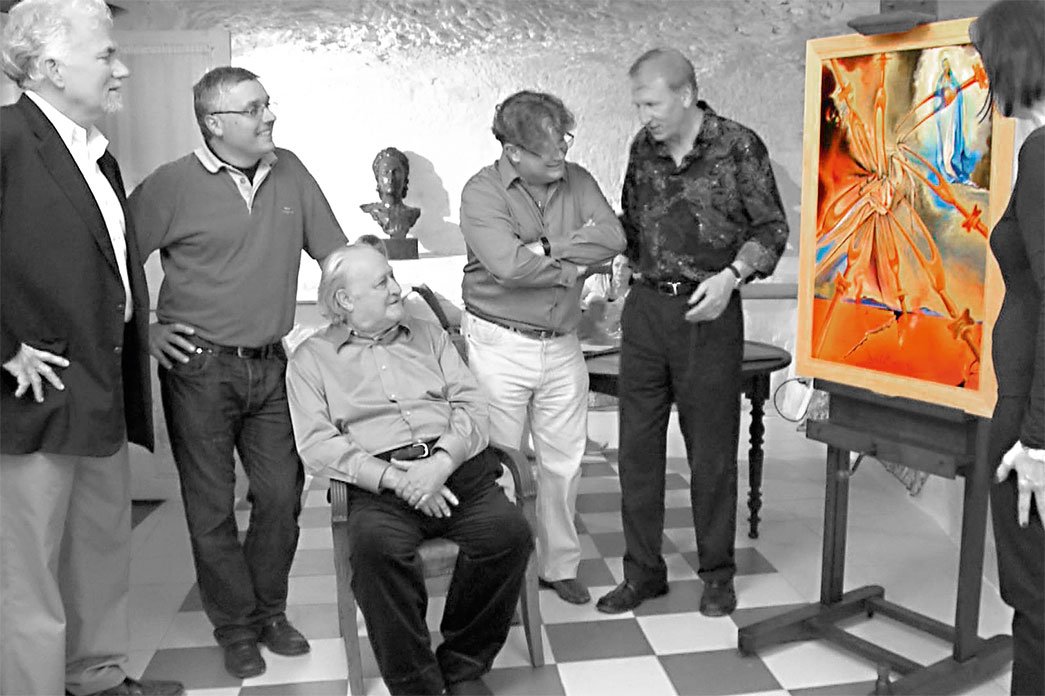 Painting of Dalí
Where is Vision of Hell currently on display?
Well it’s not under a nun’s bed, I can tell you that! They forgot that the painting was under the nun’s bed, if you can believe that! It was a nun who discovered it, sealed in the wooden box Dali had made for it, when she was cleaning the nun’s quarters. Another nun – an art lover – realized it was truly a Dali and she went to the man who commissioned it, John Haffert, and he told her the story of the painting. When news began to spread about this lost work of Dali’s, the painting was displayed in a touring exhibit of Dali’s work and then returned to The Blue Army. In 2008 it was put on sale by The Blue Army and purchased by a private art collector in Connecticut. It hangs in his private gallery and is occasionally loaned to museum exhibits. It is a magnificent piece of art. I see new and different images every time I look at it. Dali was not only a master of the canvas, but of the subconscious as well. 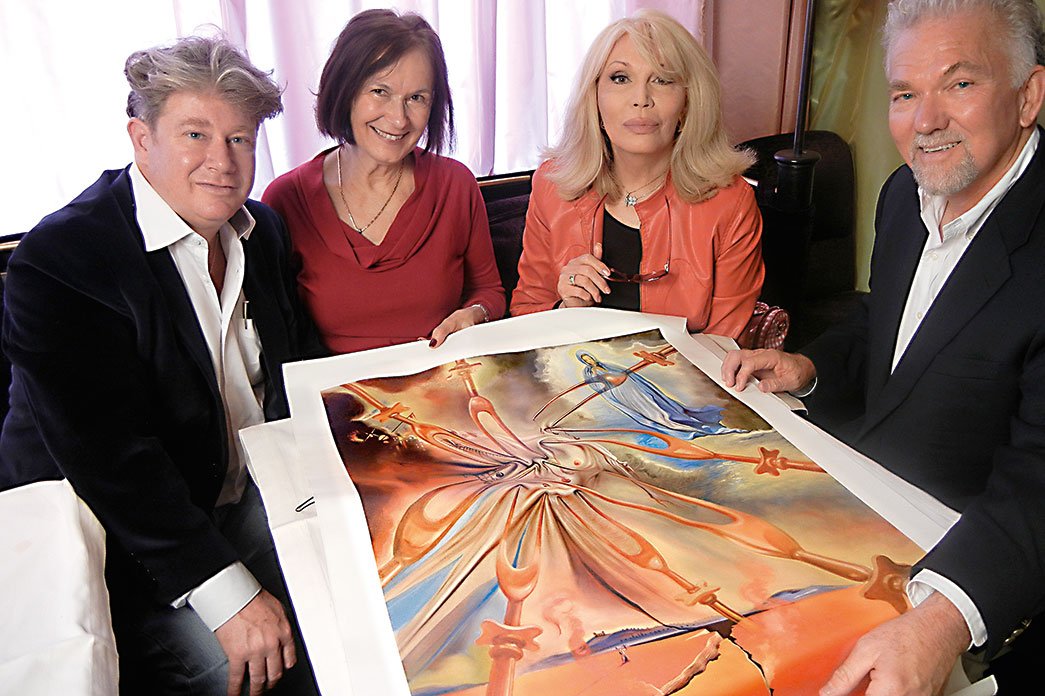 From left to right: Nicolas Descharnes, Dee Perry (wife Paul Perry), Amanda Lear, Paul Perry and a replica of Vision of Hell
This movie has won several awards (Madrid Film Festival, Berlin International, Nevada Film Festival) what does that mean to you?
It means that we captured the genius and subconscious thoughts of Salvador Dali. Those are very powerful and difficult things to capture, especially from such an illusive subject as Dali. I think what it means is best summed up by Cardinal Monezemolo of Spain who watched the film in San Marino with me, the film’s associate producers, and several members of European royalty. "You have captured lightning in a bottle,” he said. That is a very difficult thing to do and it makes me – and us, because an entire crew was involved -  very proud to have done such a thing.

And how about Fatima? What is your relationship to Fatima? And what does the message of Fatima mean to you?
I have to be honest about Fatima. Initially I wasn’t fond of it. It was too new and modern and it seemed so much more commercial than other pilgrimage sites I have visited. But I have returned to Fatima many times since I first went there to work on the story of the painting. And every time I have grown to love it more. And I have become more accepting of the fact that it is so modern because it has to be: Fatima happened only 100 years ago, which is modern in the world of miracles and pilgrim sites. Plus I have some very good friends there, including Carlos Evaristo, who is not only a television star in Portugal, he is also an expert in the history of holy relics, which is the subject of our next film. And of course the Duke of Braganza, whose knowledge has the kind of depth that only royalty can provide. There is so much in Portugal itself that is new to my American eyes. When ever I come there I experience a world that is new to me, and one I can’t help but explore. 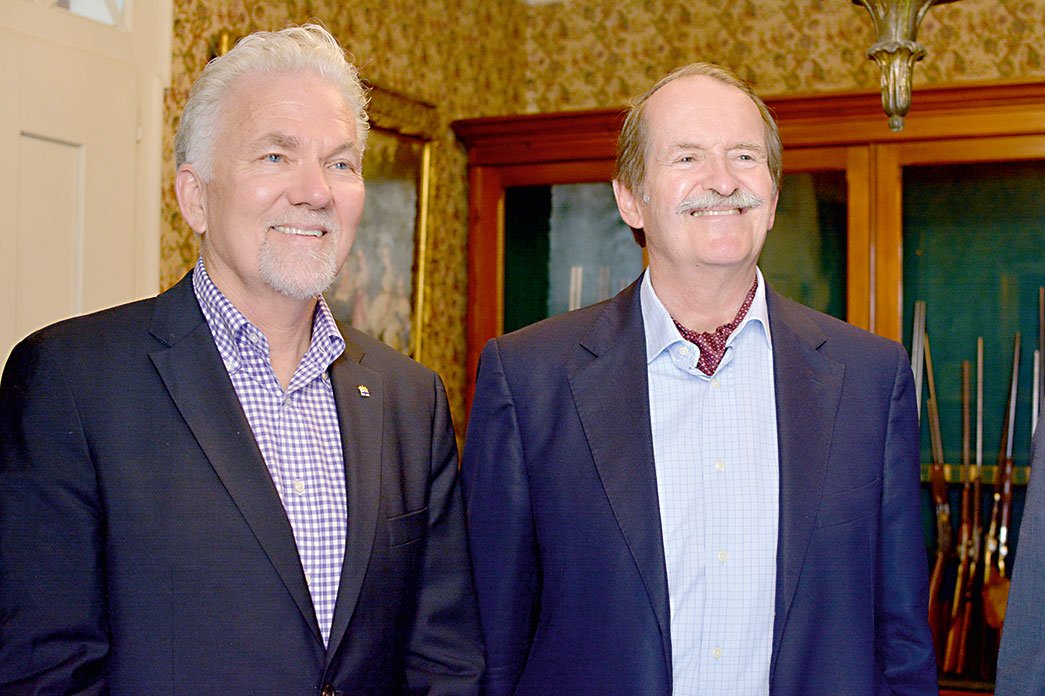 Paul Perry with Duke of Bragança
In a few days the Pope will visit Fatima. What would you tell him about the painting that inspired Dali’s Fatima Secret.
Well, you don’t get much time with the pope, so I would speak direct and quickly. I would tell him that Sister Lucia saw a photo of the painting in 1997 and told her interpreter that Dali had represented Hell as closely as is humanly possible. "To me that makes the painting itself a religious vision, a source of transformative power,” I would say. Then I would give him a copy of the film. He too has the curiosity gene, so who knows where that would take him….