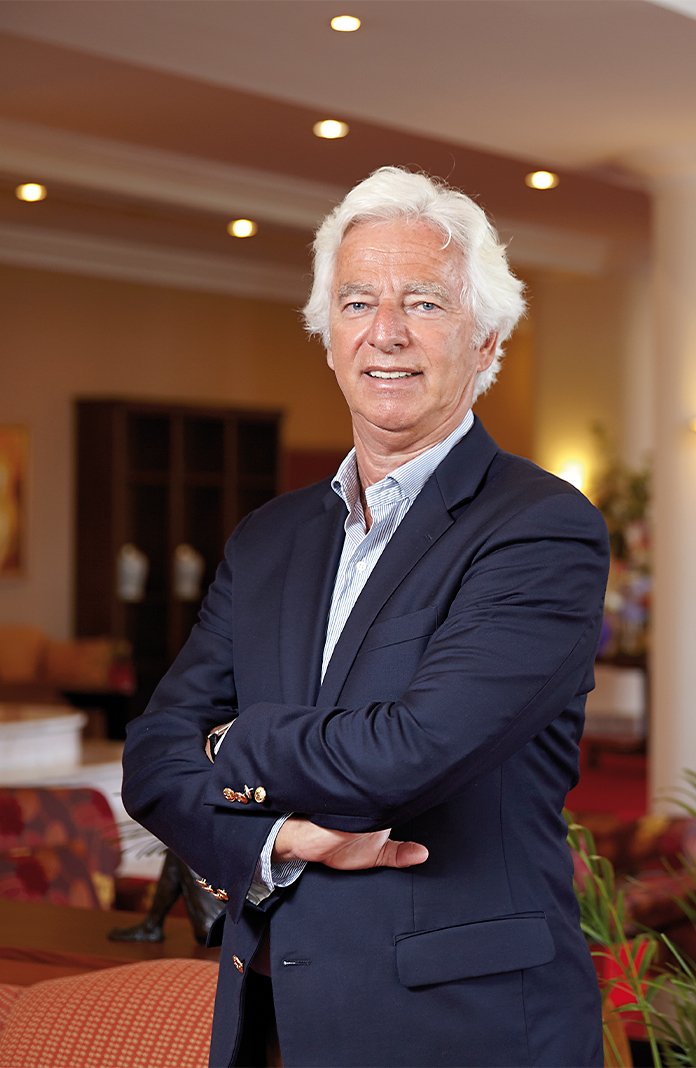 He was just starting to practice law, in which he graduated, on the mainland, when his father asked him to return to the island of Madeira and take over the running of the family’s hotels, for a short period, while the directors of the Dorisol group were going to open other spaces. The task, envisaged to last six months, turned into 14 years. The blame lay inAntónio Trindade picking up a taste for it. But the truth is that he was also competent for the job. So much so that at the end of that time he decided to fly off and set out on his own, with other shareholders. This is how the first projects of the current PortoBay Group, of which António Trindade is Chairman of the Board of Directors, came about in 1988. With hotels in Madeira, Brazil and the Algarve, it is the most internationally awarded Portuguese hotel group. Despite this, its CEO is an easy-going man, who appreciates a good conversation with his employees. And between dreams and opinions, he always ends up revealing the obvious, his passion for the island he was born on. He was a deputy in the Regional Legislative Assembly of Madeira and twice in the Assembly of the Republic. He knows what it’s like to be part of the Funchal Commercial and Industrial Association. He likes reading Portugal and the world, and serious commitment to change. In this he is as restless today as he was in his youth.

Lawyer, manager, politician, association leader, businessman, etc. What have you not yet done in your life that you would like to do?
Although the average life expectancy grows exponentially year after year, what the world lays at our feet, in terms of experiences, evolves at an even greater speed. For a citizen who wants to stay ‘alive’, the choice of alternatives that are presented every day is so big that they must constantly make choices about what they ‘still’ want to do. As I love to create, I acknowledge some frustration in never having added architecture to my academic curriculum...

This extraordinary life path made you, at a certain point, a competitor of your own father, when, in the 1980s, you left the management of the family business and launched your own business with partners. Was it a difficult decision? How did your father react?
My career choice came about in 1973, when, on starting to practice law, my father asked me to run the family’s hotels for a short time. That ‘short’ six-month experience lasted 14 years and, naturally, there was a time when Iwanted to set up a hotel group, together with other shareholders, who believed in the project. And so, with no family resentments, in 1988 the first projects of what was to become the PortoBay Group began.

When you were young you wanted to change the world. You were even branded a suspected revolutionary by PIDE secret police. Do you still have that spirit today?
What drives you mad and what are the issues that still make you want to change the world? I was born and lived in an atmosphere of opposition to the Estado Novo regime. My father, a self-confessed existentialist, was always determined to pass on his vision of democracy to his children and grandchildren. And so, even today, I remember well and with some nostalgia, the healthy restlessness of my youth. Today I consider myself a social democrat, with reflections made on what should be reserved for the state and which responsibilities and sectors should be undertaken primarily by the private sector.

You often say that having been in political positions helped you to widen horizons and to get away from the selfish vision of a businessman. What does this sentence mean? Has it made you more friends or enemies?
My vision of a politician is that they should be the one elected by the citizens to defend the equidistance of interests of the community they represent. The same cannot be demanded of the entrepreneur, whose priority practice and objectives are the defence of their company. The combination of these two experiences helps, a lot, to have a broader vision, on the part of the entrepreneur, in the areas where they are involved. Because, more than friendships, it is the contribution to the respect and consideration of their peers that is at stake.

«I consider myself a social democrat, with reflections made on what should be reserved for the state and which responsibilities and sectors should be undertaken primarily by the private sector»

It is said that you like to maintain a simple and close relationship with people, particularly your employees. The strategy and success of the PortoBay group owes much to your vision as a businessman, but also to the human being you are.
Two acronyms: PPP (Product, Promotion People) and FFF (Fit, Fresh and Fun) characterise our goals and way of being. On the one hand we have the best products, with the best promotion and in the best distribution networks, but above all we are supported by people (teams) who know how to share their personal goals with those of the PortoBay Group. And therefore, we do everything we can to ensure that it is fresh and fun to work in a ‘stripped-back’ environment.

It can be said that you were one of the Madeirans who contributed most to the island’s growth. Is the group considering opening more hotels or tourist developments at the moment?
It is natural that the period we are going through is not the most propitious for great rhythms of growth, especially those involving investment from scratch. However, we are convinced that we should grow in Portugal, namely in two strongly diverse projects, in Lagos and in Funchal.