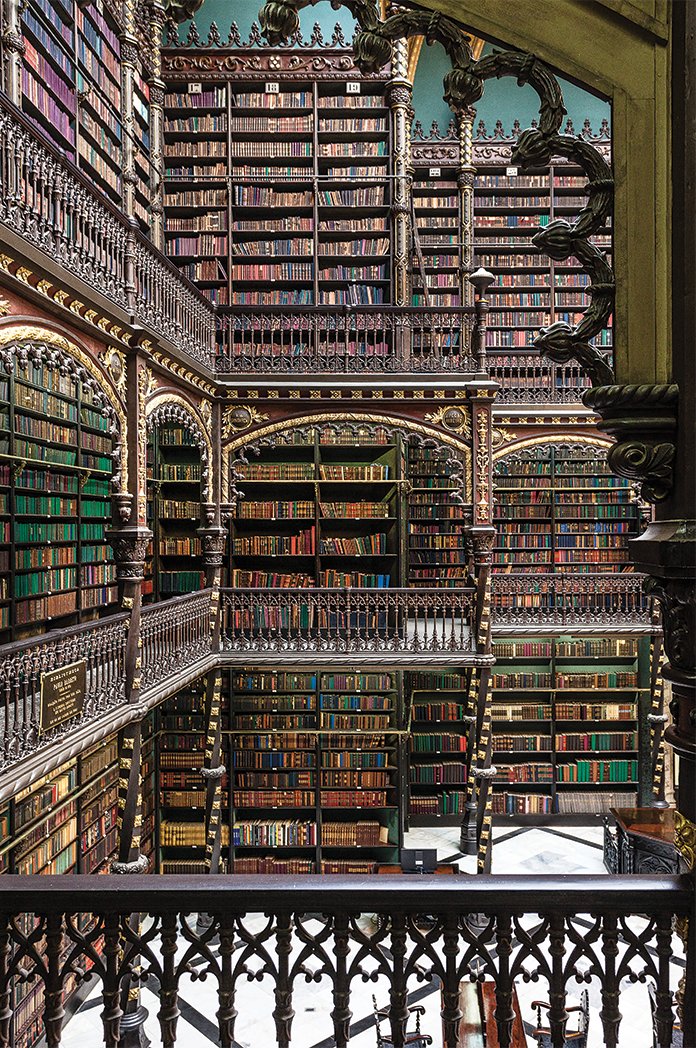 The starting point can begin in any of the stories that are housed here over time. First of all, we can start our journey through the history of the place itself. The Real Gabinete Português de Leitura appears small given the majestic stories it carries. Here there is a whole world in the power of books. There is reading to serve any of our journeys. There is a universe to discover and feel, through each work on display. Built by the Portuguese and completed in 1837, designed by Rafael da Silva Castro, a Portuguese architect in a neo-Manueline style, and inspired by the magnificent Jerónimos Monastery and the Tower of Belem in Lisbon, Portugal, this architectural project reveals all its grandeur in Rio de Janeiro, at Rua Luís de Camões No. 30. It is majestic. Here we find statues of Pedro Álvares Cabral, Prince Henry the Navigator, Vasco da Gama and Luís de Camões. The conquerors and authors of the greatest national history.

From the outside, we are enchanted by the strength of the façades. Inside, we marvel at the richness of the drawings, the hand-carved wooden shelves that reach to the ceiling, and we are dazzled by the iron and glass skylight that lights up the space. The stained-glass windows take us back to the classic cathedrals of Europe, a wonder for the eyes. You’ll find thousands of books in this place. A first edition of The Lusiads, by Luís de Camões, from 1572. One of the best-known literary riches, if not the most talked about. The library of the Real Gabinete Português de Leitura is considered one of the most beautiful in the world.

A whole world in the power of books

The Real Gabinete holds an important bibliographic collection. Inside, various works adorn the cabinets and walls, such as busts of King Manuel I, Eça de Queirós, Ramalho Ortigão, Herculano and Father Manuel da Nóbrega. In this place of culture, knowledge is acquired on every page and in every work. The taste for reading attracts thousands of visitors every year, as does the impressive building and all the stories that have passed through here since it was founded. Over the years, there has been cultural exchange between Portugal and Brazil. The Real Gabinete has undergone several restructuring processes and Portugal, through the Ministry of Foreign Affairs, under the government of Cavaco Silva, as well as under António Guterres, supported the institution for recognising its importance for the dissemination of Portuguese culture in Brazil; as well as other entities who have supported it through donations.

The Real Gabinete Português de Leitura has the largest and most valuable library of works by Portuguese authors outside Portugal – more than 350,000 volumes

The Real Gabinete Português de Leitura has the largest and most valuable library of works by Portuguese authors outside Portugal – more than 350,000 volumes. This library receives from Portugal, through the «legal deposit» requirement, a copy of the works published in the country. Many of the rare works and manuscripts can be consulted by researchers, the general collection is available to readers in the library’s hall, but, anyone who becomes a member of the Real Gabinete can take out, for a period of 15 days, up to three books – for books printed after 1950. Besides The Lusiads, rare books in the library include: the prínceps edition; the Ordenações de Dom Manuel, from 1521; the Capitolos de Cortes e Leys, from 1539; autographed manuscripts of Amor de Perdição, among many others. In this place of journeys, all that is left is to listen to and read those who have gone down in history.