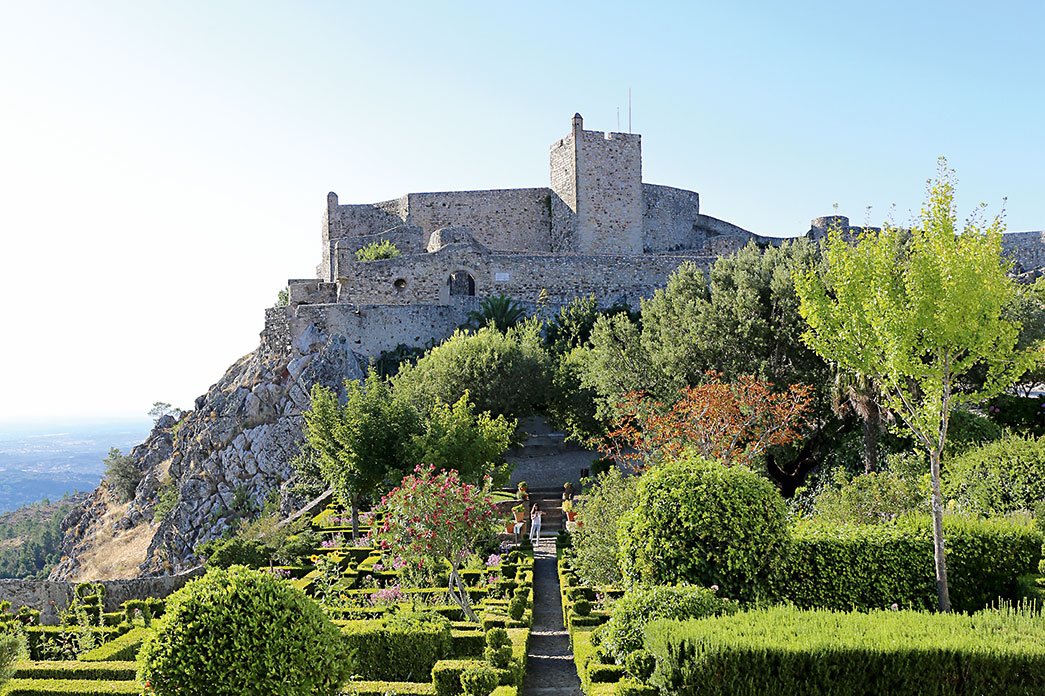 Imagine yourself enjoying seven days in the Alto Alentejo (High Alentejo), with warm, pleasant temperatures. During this summer, we set out to get better acquainted with some of the Alentejo’s villages and towns, its monuments, its food traditions and unforgettable places. The roads, in excellent condition, ensured our trip was a pleasant one. There was little traffic, and the views across the region’s plains grabbed our attention at every moment. This is a journey well worth embarking on, whether in sunny weather or on cooler days, as this is truly an enriching experience.
Whether setting off from the north of Portugal, from the centre or the south, along your journey you’ll find unique scenarios. Portugal is beautiful! Your point of departure is irrelevant, because the moment you arrive just one thing is certain: it was worth it. It was worth travelling the nation’s roads, with a few compulsory pit stops, and seeing the wonders that are waiting to be discovered. During our seven-day trip, we spent the night at the Pousada de Marvão (Pousadas de Portugal), in the Portalegre district, within the walls of the Castle of Marvão - the medieval castle -, which lies within the Serra de São Mamede Nature Park and which has been the scene of many a battle and political struggle. At the top, the steep mountains and the serra landscape of Marvão, there is plenty to see: the Capela do Calvário chapel, the Municipal Museum, the 15th-century Igreja Matriz church, the narrow, yet perfectly maintained streets, the architecture of the houses, the Gothic and Manueline legacy and the passage of the River Sever, tributary of the River Tagus. The walls of the impressive 13th-century Castle of Marvão bear witness to the history of the past, but also to the present and future. From the top of the mountains, you can see the town below, the ruins of the Roman town of Ammaia and, in the far distance, Portugal’s border with Spain. «(...) It is this place-of-arms town, the most unconquerable of all the Kingdom; in its southern part it is inaccessible, so much so that only birds are allowed to enter (...)», according to Prior Frei Miguel Viegas Bravo, in the ‘Parish Memoirs’ of 1758. And indeed, the imposing rocky is well fortified. The scenery is breathtaking, and taking the time to wander the entire compound is always worth the effort. «Very noble and always loyal» Vila de Marvão, this is how Queen Maria II referred to it.

After getting to know the walls of Marvão, we set out to discover Alter do Chão - we visited the Castle of Alter do Chão, the Coudelaria (Royal Stud Farm) and Alter Pedroso. The castle is typical of the medieval gothic architectural style of the 13th century and stands at 270 metres above sea level. The keep is connected to the main entrance; in the angles of the fortress we can find two cylindrical cubes, which complement the defensive system, and two quadrangular towers. The Castle of Alter do Chão proved useful when the Iberian Peninsula was invaded by the Romans. Between battles and conquests, the castle served several purposes, and at one point was used as a prison. In June 1910 it was listed as a National Monument and became part of the Foundation of the House of Bragança. We then visited the Royal Stud Farm of Alter do Chão - the realm of the thoroughbred Lusitano horse, since 1748. The National Stud Farm, composed of 800 hectares of land and wonderful landscapes, is dedicated to the nobility of the Lusitano breed. Here, take a look at the history of the stud farm and the museum and, if you have time, enjoy some riding lessons or take a stroll through the grounds and watch the mares grazing or else get lost in the Coach House, where the collection of coaches and traps will fascinate you. Then continue your journey towards the Alter Pedroso Lookout Point - located at an altitude of about 400 metres, in the village of Alter Pedroso. The view is fabulous, over the unmistakable Alentejo landscape. Take time to reflect, even for seconds, while the breeze ruffles your hair. Peace of mind is what you will feel. The ruins of what was once a medieval castle, dating from the 13th century, can be found here. If you climb to the top of the hill, to reach the lookout point, which surrounds the geodesic landmark, you can see the towns of Alter do Chão, Crato, the city of Portalegre and the Serra de S. Mamede mountain range.
Without leaving the district of Portalegre, we continued in search of history. We found the village of Amieira do Tejo and visited the Castle of Amieira – which stands on the long and ancient line of defence of fortresses of the Tagus. Its artistic and architectural features led to the decree listing it as a National Monument in 1922. The castle has a square layout with four towers and was built at the behest of Dom Álvaro Gonçalves Pereira, between 1350 and 1360. In the castle enclosure, the fruit trees and the walls remain intact. Inside one of the towers, the permanent exhibition is on view, explaining the history of the monument. And also, right next to the castle, you can visit the Chapel of St. John the Baptist, whose stone walls are lined with mortar. And, if you then pop down to the water’s edge, who knows, maybe, like us, you’ll spot some anglers in action.
The days passed by, and we got to know new places. This time we travelled to Arraiolos to visit Arraiolos Castle – considered by port.com to be one of the world’s most beautiful and iconic. The castle that once defended the borders of its territory, and which dates from 1305, is today a tourist attraction and is one of the few in the world to boast circular architecture. Time has taken part of its inner structure, although the walls remain intact. It is stood on the top of the Monte de São Pedro, enabling 360º views over the town. The Igreja Matriz church, inside the castle grounds, stands out even more. Also in Arraiolos, we went off in search of Arraiolos Rugs, visiting the Interpretive Centre of the Arraiolos Rug – certainly worth a visit. The history made up of parts, the handmade period pieces and the presence of a lady hand embroidering an Arraiolos Rug, as done in ‘olden days’, induce you to protract your visit. They are true works of art, the tradition of which is very present and alive in this town - the earliest reference to Arraiolos Rugs dates back to the end of the 16th century.

Castle of Alter do Chão

As history appeared to be the guiding thread of our journey, we went to Crato - a small town with about 1600 inhabitants. We stopped to rest at the Pousada Mosteiro Crato, in the village of Flor da Rosa, which is about 20 km from Portalegre. The Monastery of Santa Maria provided the scenario for a beautiful and luxurious hotel. The Gothic style and the outline of the building have remained intact, preserving this iconic monument.
And our journey continues. «Oh Elvas, Elvas! Badajoz in Sight». We went to Elvas, where we visited the city walls, the Castle of Elvas and Nossa Senhora da Graça Fort. We wandered through the streets of Elvas, a city, which, from the Middle Ages until the 18th century, served in defence of the border region of Alto Alentejo, at a time when danger was lurking close by, in Spain. The curtain walls and the traditional houses remain and, close by, flows the River Guadiana. We stopped for lunch at the Adega Regional restaurant, which can be found inside the walls. Once we’d finished, we headed up to Nossa Senhora da Graça Fort - also known as Conde de Lippe Fort – which stands a kilometre from the town, in the parish of Alcáçova. From the top of Monte da Graça, the view is breathtaking. The fort, which gained UNESCO World Heritage status in 2012, is a gem to behold. It currently figures on historical routes based on Portuguese heroes. The Fort resisted Spanish troops during the so-called War of the Oranges (1801) and many other invasions.
Having visited this land of legends, we popped over to Badajoz - an easy feat as the Spanish city is about 10 minutes from Elvas. We left the Alto Alentejo Route, but the detour into Extremadura was well worth it. We just visited the Alcazaba of Badajoz - a citadel within the historic centre of Badajoz, surrounded by steep slopes and nature. The city was founded in 892 by Ibne Maruane.
Again, in search of territories rich in history and legends, we arrived at the district of Évora and visited the Castle of Estremoz - built on the hill to the north of the Ossa mountain range. It served in the defence of the Alentejo border. Estremoz is associated with military episodes of the history of Portugal. It was in the castle that Queen Elizabeth of Aragon passed away, in 1336.
We also went to Castelo de Vide – home to the «Andanças» festival. Soaking up its romantic character, its beautiful gardens of unique vegetation, we rested at Póvoa Dam - the second largest reservoir in the district of Portalegre, which lies 5 km from the town. We climbed the long stairway to the Ermida de Nossa Senhora da Penha hermitage - built in the 16th century - in the Serra de São Paulo hills. From the top, views look down onto the town of Castelo de Vide. The building is simple, the chancel round and the interior is lined with tiles.
Making the leap into the district of Castelo Branco, we slowed down in Vila Velha de Rodão - where we found the famous Natural Monument of Portas de Rodão. We visited the Castle of Ródão, entirely surrounded by a charred landscape, due to the flames that pass through this summer, but even that took nothing away from the beauty of the monument. From the top of its walls, the views over the Portas do Rodão - a natural geological monument - and the Tagus Valley are amazing. The Portas do Ródão result from the intersection of the hard quartzite relief of the Serra das Talhadas hills with the current of the River Tagus. We wanted to go a boat trip, and yes, you get a better view on the steep walls, measuring about 170 m high. The two portas (gates) separate, on the one side, Beira Baixa, on the left bank, with Conhal do Arneiro, and, on the right bank, Vilas Ruivas. On the boat trip, if you turn off the engines, you can better appreciate the local birdlife – home to griffon vultures, as well as to black storks and red kites.
Not wanting to leave Alto Alentejo without once again passing through neighbouring lands, such as the city of Cáceres - a feudal city in Spain, the site of historical battles between the Moors and Christians - we went to find out more about this place. Its narrative is reflected in the architecture found in the city - a blend of Romanesque, Arabic, Gothic and Renaissance. It is a beautiful and interesting Roman city, considered the Third Monumental Complex of Europe in 1968 and a UNESCO World Heritage Site in 1986. You will find towers, palaces and stately homes to visit. And you can get lost among the walls of the Plaza Mayor.
Sometimes it is difficult to escape the scheduled route on a given trip and so on the last day we set off across the country towards Comporta beach - about 3 hours from Marvão, where we were delighted by the green rice fields (rice production is one of the activities of the region) and witnessed a magnificent sunset, on the practically deserted, white sandy beach of Herdade da Comporta, on the coast of Comporta, where the land ends and the sea begins.