A golden nugget in the Atlantic 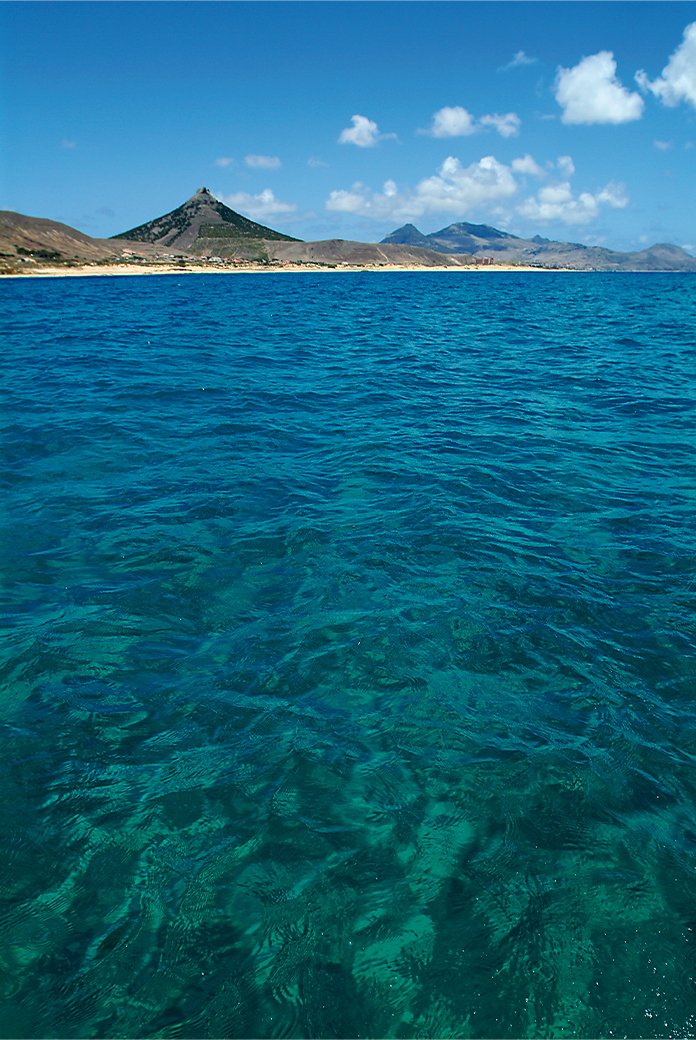 Legend has it that, in 1418, after having gone through a great sea storm, navigators Tristão Vaz, João Gonçalves Zarco and Bartolomeu Perestrelo found an island where they could take shelter. The name «Porto Santo» [Blessed Harbour] was thus given out of gratitude. But in historical records, dating back to 1370, before the arrival of the Portuguese, the same name was already given to the place for the same reason.
Located in the Atlantic Ocean, this is the smallest inhabited island in the Madeira archipelago. It is 500 km from Africa, 900 km from Europe (it is a one-and-a-half-hour flight from Lisbon), 1300 km from the Azores and only 50 km from Madeira, from which it could not be more different, in terms of landscape. With a surface area of approximately 42 km² (11.4 km long and six km wide), the island is not particularly mountainous. Even so, the existing elevations are, for the most part, more noticeable to the north, highlighted by Pico do Facho, whose summit reaches 517 metres.
In Porto Santo, gold is the dominant colour. From its sandy beach, which stetches an incredible nine kilometres, to its unusual and abundant geological formations. This is why it is often called the «Golden Island». Bathed by turquoise and crystal-clear waters, the desire to bathe in the sea and sunbathe here is irresistible. It should be noted that the sand has rare therapeutic properties. It is also an excellent place to explore the underwater world, where you can experience visibility of up to 25 metres.

Bathed by turquoise and crystal-clear waters, the desire to bathe in the sea and sunbathe here is irresistible.

In the town of Vila Baleira you’ll find stories and legends to listen to. We recommend the Casa Museu, where Christopher Columbus once lived. The cliffs of Fonte da Areia are another point to discover, as well as the many windmills.
To the north, you can breathe in the pure mountain air provided by the extensive pine forest. Walking or driving are both good options to discover the wonders of nature. Porto Santo’s more-than-100 snail species have been of interest to scientists the world over, and have even been collected and taken to London, Paris and Philadelphia as evidence proving the Darwinian theory of evolution.
There are various restaurants and bars where, besides the bolo do caco bread roll speciality, you can try many local gastronomic delights – such as octopus sandwich, black scabbard fish or skipjack tuna dishes, which always go well with the Madeiran beer Coral or the traditional poncha. Lambecas ice cream is also famous, a household name with many years of tradition. The island also boasts a golf course, designed by Severiano Ballesteros – Porto Santo Golfe.
The airport offers regular flights to Funchal, lasting a mere 15 minutes. There is also a ferry link to Madeira.