Made of colour, history and flavours 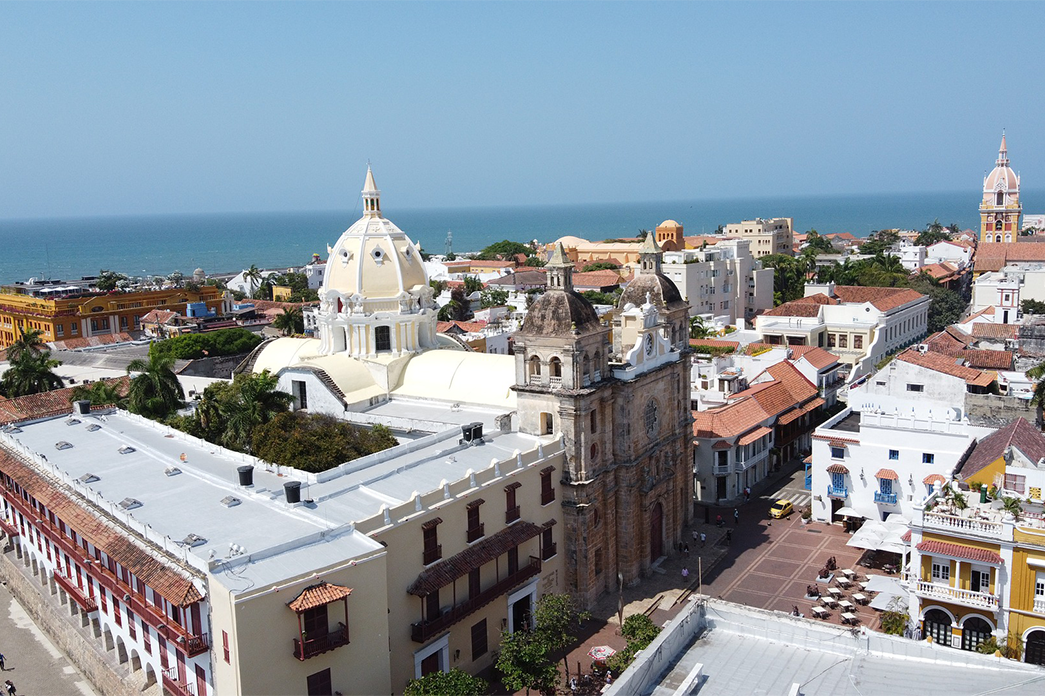 «La Heroica», as Cartagena de Indias (or just Cartagena) is also known, is one of the most beautiful and well-preserved cities in the Americas. Founded in the 15th century, it is located on the shores of the Caribbean Sea, in the northwest of the South American continent, and has long become famous for its historic centre, but also for its idyllic images, with its many islands washed by the warm, crystal-clear waters. This fabulous destination holds the secrets of centuries of history within its walls, its colourful balconies and verandas, the people and the narrow, cobbled streets that inspired the eternal writer Gabriel García Marquez (who lived here and wrote so much about it). The 1982 Nobel Literature Prize winner’s love for the city was such that his ashes are laid to rest in the Cloister of La Merced (University of Cartagena).
The city also enjoys a bustling nightlife, excellent food and a simmering selection of cultural offerings. All this makes it a treasure preserved over time, and it is currently one of the most popular tourist destinations in Colombia.
If you decide to embark on this adventure, be prepared for the heat that is felt all year round. Let’s start by visiting the historic centre, exploring the San Felipe de Barajas Castle, where you can learn about the history of Cartagena in great detail. Discover lots of surprises on a tour of old churches and famous monuments, such as the one dedicated to India Catalina, Los Zapatos Viejos, Los Pegasos and the Naval Museum.

The city also enjoys a bustling nightlife, excellent food and a simmering selection of cultural offerings

As you walk, soak up the music and local rhythms that, together with the handicrafts, bring the streets to life. We also suggest taking a few hours to enjoy the beautiful, bohemian Getsemaní neighbourhood. In 1811, the Plaza de la Trinidad hosted the uprising of the people that began the fall of the Spanish Empire. Cartagena was, in fact, the first territory of present-day Colombia to be fully independent. Getsemaní is rich in street art. Graffiti can be seen all over the place, always in bright colours, representing tropical and typical scenes of Caribbean culture.
Unlike in Bocagrande, Cartagena’s most modern neighbourhood (where the skyscrapers are), here you can see the purest spirit of the city, with children playing in the street, neighbours chatting at the window and old people resting in rocking chairs, waiting for a cool breeze that doesn’t always come at the end of the day.
If you want to taste some typical dishes, try the Fuerte San Sebastian del Pastelillo (Fishing Club); Juan del Mar; Celele; Harry Sasson; Alquímico; Andrés Carne de Res; La Olla Cartagenera... The list is long. In these restaurants you can find Arepa Colombiana (a kind of tortilla); Ajiaco (soup made with corn, chicken, capers and different types of potatoes); Arroz con coco and Patacones (fried pieces of banana), among others. To quench your thirst, enjoy a coconut lemonade – a refreshing drink made of coconut milk, lemon, sugar, water and ice. And speaking of refreshing, visit the beautiful beaches on the islands of Baru, Islas del Rosario, Tierra Bomba and San Bernardo, famous for their coral reefs. They are simply breath-taking.

Here you can see the purest spirit of the city, with children playing in the street, neighbours chatting at the window

Cartagena de Indias, declared a UNESCO World Heritage Site in 1984, offers a wide range of accommodation, from luxury hotels, to boutique hotels and traditional colonial hotels. If you have any questions, there are several information points scattered around the city at your disposal. Enjoy your trip.