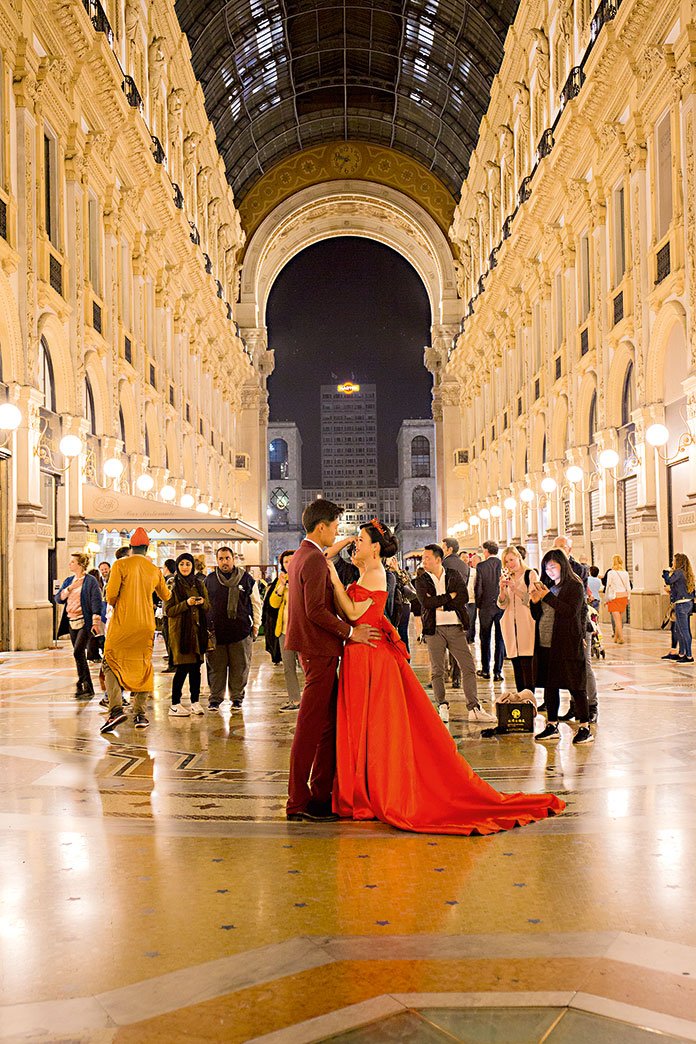 P. ©PMC
Entrance to the gallery from the Piaza Del Duomo / Marriage in the Galeria Vittorio Emanuele

Is a luxury shopping trip just what you need? If it is, then this issue we’re taking you to experience one of the most iconic shopping centres, housing some of the most extraordinary luxury brands. It is located on the Piazza del Duomo, right next to the Italian city’s famed cathedral – Duomo di Milano. It’s hard not to think about Milan without picturing the Galeria Vittorio Emanuele – which was named after the first king of a united Italy, Vittorio Emanuele II. This is a cross-shaped building, which majestically welcomes tourists from all over the world, and a veritable shrine to luxury goods. The central dome, made of iron and glass, ensures that natural light sufficiently illuminates the space, a true monument to designer shopping. This is one of the chicest places in the city. In former times, the bourgeoisie would parade along these arcades, prior to seeing shows at the Teatro Alla Scala. Today, they do so with another purpose in mind: high-class shopping.
Opened in the second half of the 19th century (1867), during the Belle Époque period, and designed by Giuseppe Mengoni, the building is home to historic cafés and restaurants, such as the Biffi Caffè (dating from 1867) and the luxurious Savini (from 1882),  among others. The boutiques of major brands, such as Prada, Louis Vuitton, Gucci, Versace, Giorgio Armani, Swarovski, Mercedes Benz... add further to the beauty of this place, where ostentation rules. For some, this is Milan’s most luxurious building. Is has views over the cathedral and is the city’s most iconic landmark. The charm of the Galeria Vittorio remains intact, 150 years since it first appeared. The monument’s structure has stood the test of time and retains a modern feel. In the central part of the gallery there are mosaics representing the four cities that, in their time, have been the capital of the Kingdom of Italy (Milan, with Napoleon; Turin, represented by a bull; Florence and Rome, with the image of a she-wolf feeding Remus and Romulus). In addition to the many brands housed here, there is a tradition that needs to be fulfilled whenever you visit the Galeria Vittorio Emanuele: you can’t forget to spin three times, on your right heel, above the balls of a bull appearing in one of the mosaics on the floor (located to the left of the octagon towards the Piazza della Scala). Doing so is meant to bring you luck!
Lucky or not, Milan is Italy’s second largest city and is also known as the fashion capital, and so, going shopping in the luxury boutiques of the Galeria Vittorio Emanuele has become a cliché for fashion lovers. Many famous faces go on shopping trips to Milan. As such, if you want to join the jet set, why not take your own flight to the city of fashion?!