«There is always a brave new world waiting for us» 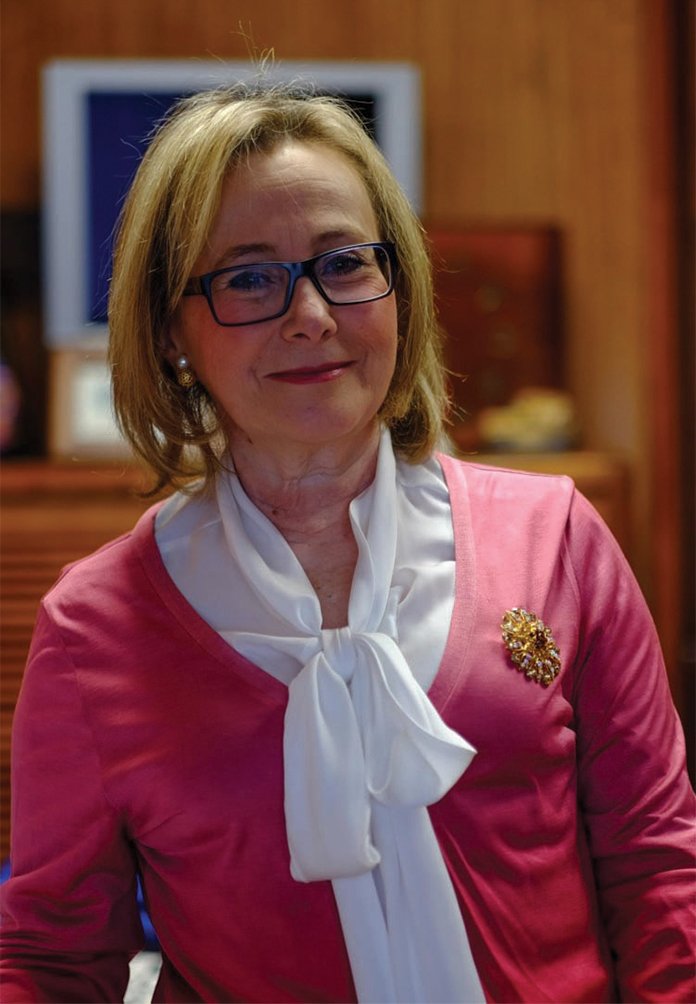 Born in Huambo, Angola, in the middle of a pandemic year (Asian Flu), she began her medical studies at the Faculty of Luanda, influenced by two friends. Today she is 64 years old and has many ‘flus’ engraved in her memory. In Portugal, there is no one who does not know her name or her features. Resilient, with a soft voice, she stood firm for weeks on end during the COVID-19 development updates. A year and a half of great intensity, which will have still more chapters before it ends. Graça Freitas, one of the strong women that the pandemic catapulted into the spotlight, is the director-general for Health. A name that is here to stay.

If you could choose, which would be the moments that have most marked the country and the world in the last 20 years?
There would be many, but the ones that have touched me most personally were 9/11, precisely 20 years ago, and the current pandemic. From the first I will always remember, a plain as day, the image of the first plane hitting the first tower, both in immediate terms, on that day, and its consequences for our collective life in the future. We may no longer realise it, but there was a before and after September 11 in the USA, which changed our way of seeing life and how we live it.As to the second moment, there is no escaping it. It was indeed this pandemic. I have been through more than one because I am 64 years old and I was born in the pandemic year of 1957. My mother had pandemic flu days before I was born; I had flu in the next pandemic, in 1968. Then, as a professional, I went through the 2009 flu pandemic, I experienced several biological threats – the worst of all was SARS, in 2003, also caused by a coronavirus. But, in fact, this pandemic caused by the SARS-CoV-2 virus is unparalleled, it was and still is brutal. In all our lives, in our relationships, in our health, in our well-being and even in the way we have died in this last year and a half. And the fear that has accompanied us.It was a brutal change because of the magnitude and speed of the consequences. I will never forget the image of the city of Wuhan without people, or the image of the area of the city where I live, when one weekend, in the first lockdown, I couldn’t see a single soul from my balcony. That day I went out on the street for a «hygienic walk» and heard what I had never heard in my city before: birds, crickets, frogs, ducks and sounds of other unknown bugs. And I said to my husband, «Where did all these bugs come from?» The answer was: «They were already here. It’s just that we couldn’t hear them.» Before, there was noise, the noise of the people. This pandemic, for everything it has meant in our emotional life, in our physical, mental and social health, for the speed with which it challenged us, for the impact it had and has on millions of people at the same time, is in fact an event that we will never forget.

Professionally, what was the most decisive moment for you in these two decades?
The most defining moments were the two pandemics. I cried when I saw Margaret Chan of the World Health Organisation announcing the 2009 flu pandemic, because it has always been very present in my life, especially as a medical student and as a doctor, what the «Spanish flu» had been, how many people died, the suffering it caused, the fear of contagion from that disease and how that fear radically changed the relationships between people. I have read a lot about that pandemic. Over the last 40 years, I have lived with the stories of the «Spanish flu», which broke out in 1918 and caused a major humanitarian catastrophe. When, in the DGS, we started to make contingency plans for a possible pandemic, the «Spanish flu» was always on our minds, not least because we had had a recent incident with the so-called «Hong Kong chicken flu», which had caused an enormous lethality rate and led to the extermination of millions of birds in order to contain that outbreak. So for me it was very shocking to see the start of a new flu virus pandemic, fearing that it could be like the 1918 pandemic. When it was announced, I thought that at the end, I and those close to me will possibly have lost friends, family or our own lives. That the map of our affections would be drastically affected and society would be weakened. Fortunately, the virus was not as severe as anticipated and the repercussions were not as dramatic.However, in the current pandemic, compared to the «Spanish flu», although we have other tools, another social structure, we have massively applied non-pharmacological measures, we have much better care capacity and different times, we have reached this point, victims of this pandemic, because we are an overcrowded planet with an unprecedented mobility of people and goods. We have confined ourselves, we isolated, many have fallen ill, many have had relatives and friends who have fallen ill, unfortunately who have died. In some way, this pandemic has reflected the fear and the health, social and economic impacts that the 2009 flu pandemic did not bring. The feeling that when it ‘ends’ we will be different, we will be less and we will have losses to regret is very clear.In any case, it has created a number of opportunities and shown how capable we are of responding to adversity, of adapting, of fighting, of doing almost the impossible to control a virus or other threats. When it all started, we were able to contain the disease for a period of time that we used to organise the next responses. And that was because we had a Contingency Plan that we applied. Now, in this current phase, with vaccines that were discovered and produced in record time, we will have controlled the transmission of the virus to levels that we can manage without excessive dysfunction. Despite the success of the vaccination in Portugal and other countries, we are still afraid of mutations, of variants, if the variants will be more aggressive, if they will have the capacity to escape our immune system.This pandemic is far from over. We still have to be alert and vigilant, we still have to be cautious, but at the same time we have to live freer lives and, therefore, here too, a word of optimism, of hope, because we have to continue to take care of our loved ones, to see our friends, to rest, to have fun, to go for walks, to cultivate ourselves, to make plans. This is the great capacity that we have as human beings: to regenerate ourselves and, despite the adversities, to always look ahead and continue, fighting for a fairer society, better working conditions, better health conditions, better living conditions. There is always a brave new world waiting for us.

What do you think is the most urgent change that the country and the world need to make in the next 20 years?
I would like the next few years to bring greater solidarity, more justice and less inequalities, inequities and asymmetries, taking advantage of the digital transformation in order to boost excellence and security in the various aspects of our individual and collective lives, greater ability to understand each other, to communicate, to achieve goals for the common good, improving in some way what we are as a species, more creative, fairer, more empathetic, humanised and with solidarity. We often think about the differences that exist in the European region and even in our country, but also in the world, and we worry about these differences, which separate us, which create gaps between peoples, which threaten us all together. This pandemic has proved that the fragility of some is the vulnerability of all.