«Reopening the economy must not put controlling the pandemic at stake» 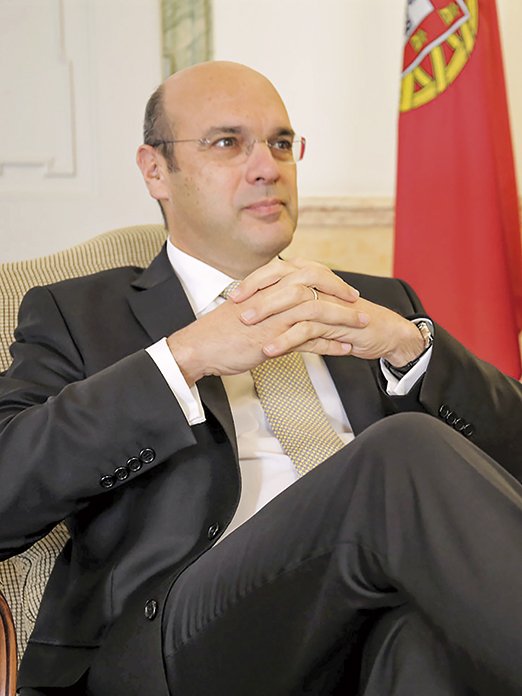 The world is going through a critical time with regard to the economy and social welfare. Nobody expected that in just a few months countries would close their doors and as a result there would be no movement of people and goods that generate revenue. In Portugal, the government is developing initiatives to minimise the economic and social impacts of the new coronavirus pandemic, while trying to keep companies and jobs going. Pedro Siza Viera, Minister of Economy and Digital Transition, and number two in the government, given this unexpected scenario, revealed to Villas&Golfe that the country, and all of us, faces hard times ahead. Now that the most critical phase has passed, the focus is now on getting the economy back on its feet.

We are going through a moment that no one expected. Can you make any assessment of it, even if it is premature?
The government’s projections for GDP, unemployment, deficit and government debt in 2020 are not yet known. But according to the latest data from INE (Instituto Nacional de Estatística | National Institute of Statistics), the economy has shrunk 2.4% year-on-year in the first quarter, when the effects of the lockdown and the significant reduction in exports were felt through the closing of external markets. And, although data for May is still in short supply, we can assume that the economy has started a gradual process of recovery. The strong and quick response by companies to the support launched by the government reveals the spirit of resilience and desire to survive on the part of entrepreneurs. We are therefore focusing on the coming months, which will depend on the progress of the pandemic and the success of the gradual lifting of restrictive measures, both in Portugal and in the European Union.

Hotels, restaurants and the like are among the sectors most affected. Will there be extraordinary compensation if the reopening in the planned model does not work?
The government has been working as actively as possible with the sector to create conditions for recovery. The creation of the Clean and Safe label has been a powerful international communication tool for Portugal as a safe destination. We have launched the «Programa Adaptar | Adapt Programme», which provides non-repayable support for the expenses that companies have incurred. The aim of reopening the economy must not put controlling the pandemic at stake. We must be prepared to monitor the impact of ending lockdown and, if there is a worsening of the health situation, we can take a step back and the support can be reviewed.

The car industry also has a major impact on the economy. Have changes been planned here to the European Union’s Recovery Plan?
Yes, it does indeed have a very significant importance in Portugal, as the main goods export sector. The EU Recovery Plan will, from what we can tell, enable the different countries to accommodate the needs of their business fabric, which, in the case of Portugal, corresponds to a special attention to sectors that employ a lot of people, have added value and export capacity, such as the automotive industry.

Are there plans to extend ‘simplified lay-off’ for companies that depend on tourism and others?
The ‘simplified lay-off’ measure was essential in the lockdown phase of the economy, to preserve the productive capacity of companies and to protect employment. In the phase we are entering now, it should be replaced by a mechanism to support business activity, rather than financing the suspension of employment contracts. This does not prevent ‘simplified lay-off’ from being maintained in those sectors or activities where closure continues or which are most exposed to external demand.

It would appear that support for business liquidity may reach 13% of GDP. To what extent might this affect us if the recovery of activities isn’t as expected?
Liquidity support measures for companies are indispensable if they are to preserve their productive potential and be able to respond to demand when it is restored. If we had not made them available, we would probably not have the recovery we could have.

«European prosperity is key to the Portuguese economy»

The number of unemployed is increasing every day. Will there be any exceptional measures, such as a new model for minimum income?
Now that we are entering the phase of stabilising our economic and social situation, unemployment and other situations of loss in income will persist for a few more months and we have therefore approved a stabilisation plan which responds more comprehensively to these problems.

Could this be the ideal time to promote more incisive policies for Portugal’s interior regions to combat depopulation?Territorial cohesion is a strategic goal and has given rise to the creation of a new ministry. Over the last few years, incentives have been created for the establishment of companies and keeping people in inland areas, and there are also various financial supports for job creation and investment, but these have not been used to a great extent. However, the teleworking experience has shown that it is possible to have a professional career without being in the company. Lockdown has led to an appreciation of large spaces and larger residences and these factors may lead more people to place more value on the chance to work in inland areas, where there is a higher quality of life, lower setup costs and quality social welfare facilities.

«When faced with collapse in demand, the answer is not austerity, but rather a new momentum in demand»

If the EU’s response were to be austerity, you said: «we will lose a decade». What can be done to counter that? Cut spending? And might tax increases happen?
The EU’s response is clearly not austerity. At a time when all European countries are affected in the same way and the free movement of people and goods has been affected, it is the single market itself that is collapsing. European prosperity is the key to the Portuguese economy; we sell 75% of our exports to the EU. The richest countries, Germany and the Netherlands, also send most of their exports to the Union. The economic reconstruction of Europe is therefore in the self-interest of all Member States. And when faced with collapse in demand, the answer is not austerity, but rather a new momentum in demand.

Can supporting start-ups create a different status with relation to other companies that create many jobs?
Portugal has been strengthening its position as a name in the areas of Innovation and Technology. So, in exceptional times, the government couldn’t help but support this eco-system of entrepreneurship. Indeed at the end of April it announced a series of five measures worth more than 25 million Euros. In this context of a pandemic, start-ups can also apply for two supports, already in place, which have been adapted for more effective responses.

With regard to TAP, can the government take a step back and take hold of the reins of the company, going against European trends in private management? Can it finance the carrier without nationalising it?
At the time I give my answers in this interview [May 28], the government and TAP are in discussions about the future of the airline and I shouldn’t anticipate scenarios at this moment. TAP is a strategic company for Portugal and the country should seek to create conditions to preserve it.

«There have been sectors and companies that, due to their specific characteristics, have managed to take advantage of the change caused by the pandemic to reinvent themselves»

How long will it take for the economic recovery if the number of cases of the new coronavirus remains in acceptable numbers?
National and international scenarios indicate that, by the end of 2021, the country’s economy will be close to the situation in which it found itself in 2019.

To boost the economy, would it be possible to review the Golden Visa regime for the better, now that we need more people working, spending and investing in Portugal?
The residence permits for investments remain in force. The possibility of being granted so-called Golden Visas for the acquisition of property in the metropolitan areas of Lisbon and Oporto has, of course, been restricted. But, already in previous years, these applications were low in number, with less than a thousand applications. Portugal has the capacity to attract residents and investors independently of this instrument.

What is your main concern as a minister, with regard to the population?
We know that we will not be the same in the post-Covid-19 era. Neither will the economy. There are companies that will stay on their path and jobs that will disappear irretrievably. We hope, and we will continue to make efforts to this end, by creating mechanisms aimed at the capitalisation and recovery of our viable businesses, which, because of an extraordinary and extemporaneous situation, are under threat. These companies will provide the foundation of the economy that will enable us to respond to the revival of world demand and create new jobs in Portugal. I would like to point out that there have been sectors and companies that, due to their specific characteristics, have managed to take advantage of the change caused by the pandemic to reinvent themselves, continue to export, retain and train new talent, support their employees and, in a short space of time, overcome the challenge of digital transformation.