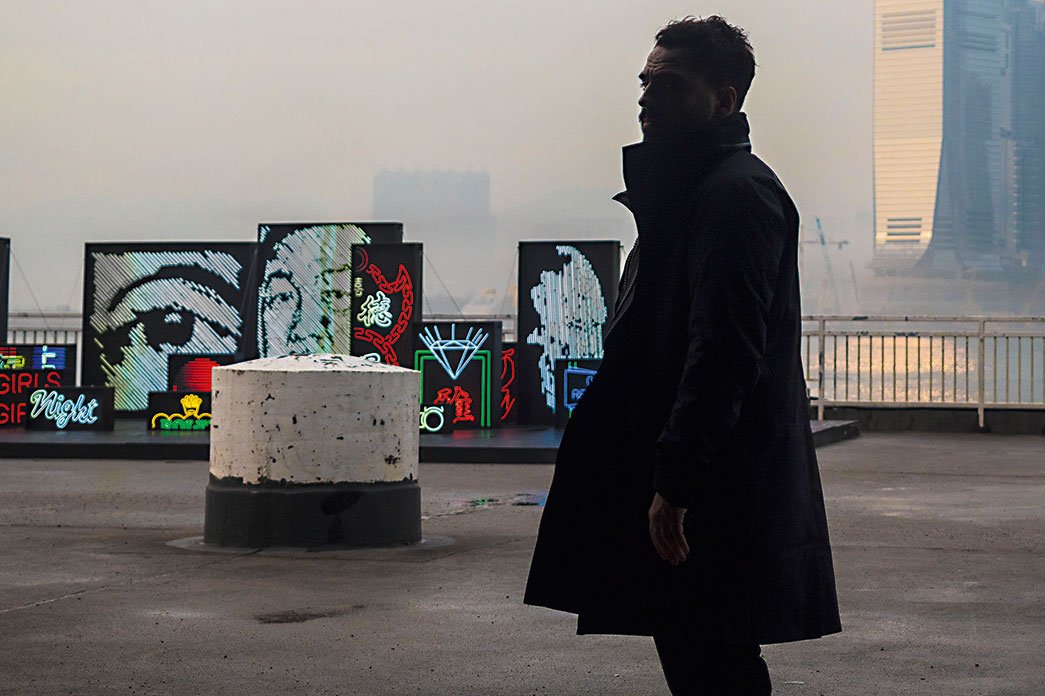 He is known for his graffiti art. For the faces carved into walls. He was still a child, just 11 years old, when his artistic life began, through painting. He painted walls and trains. He didn’t come from a family of artists, although the education his parents gave him, «encouraging curiosity for knowledge and an active interest in world affairs», certainly contributed to Alexandre Farto aka Vhils developing an open and receptive attitude. He grew up on Lisbon’s South Bank. And every time he walked along its streets, past one of the huge political murals, he was fascinated by what he saw. And so it was, that over time, Alexander began creating his first graffiti, around 1997. Along the way to school, the walls were filled with creations by the yet very young artist.

The direction of Alexandre’s life changed to focus on other interests, but graffiti would proof to be his school of artistic training «more than any formal institution in which I was enrolled,» says Vhils, adding, «even today, many of the techniques and tools that I use came from this ‘street school’.» He applies some of the graffiti-related concepts to his pieces, just as he began to understand «the potential of using the public space to communicate with a wider audience» through graffiti.
But why does Vhils choose public spaces, we asked him. «Today I am still interested in creating work in the public space because I still believe that it is the most democratic and direct medium with which to express ourselves. I really like working in the studio and exhibiting my work indoors, but the street has an energy of its own. It is a direct conversation with the city and its inhabitants, without intermediaries. It is one of the few contexts in which art accepts, without issue, the ephemeral nature, the organic and transformative character of both life and all of humanity that it contains», he replied.
Alexandre Farto, or Vhils, as most people know him, studied in London at the University of the Arts. From there he recalls the challenges, but at the same time he did not feel that «the studies themselves contributed decisively to [his] artistic education and the development of [his] work», because before going to London he had already done a lot of work in Portugal and he already knew what he wanted to do.
«What London gave me, above all else, was the opportunity to be in a truly global city with loads of opportunities», Vhils acknowledges. When he was there he was invited to participate in some events, such as the Cans Festival, which really got his work out there. When his work gained a certain dimension and international presence, Vhils decided to return to Lisbon to open his studio. With this, he showed that you can do work for a global audience, from a country considered to be peripheral. And, from a more personal point of view: «[I] wanted to give something back to the country that had invested in [my] training and to somehow contribute to [its] development, supporting and developing initiatives in the arts», he says.
«I think that we are the product of everything that surrounds us and everything we have been through»
He is one of the best-known urban artists. Everything within him, and that surrounds him, is a potential source of inspiration. «I think that we are the product of everything that surrounds us and everything we have been through», says the artist, whose inspiration comes from his work, its landscape, its history, its culture, its people, its colours and textures, its contrasts, the layers that make up its walls and its visual identity. And we asked him questions, and more questions... 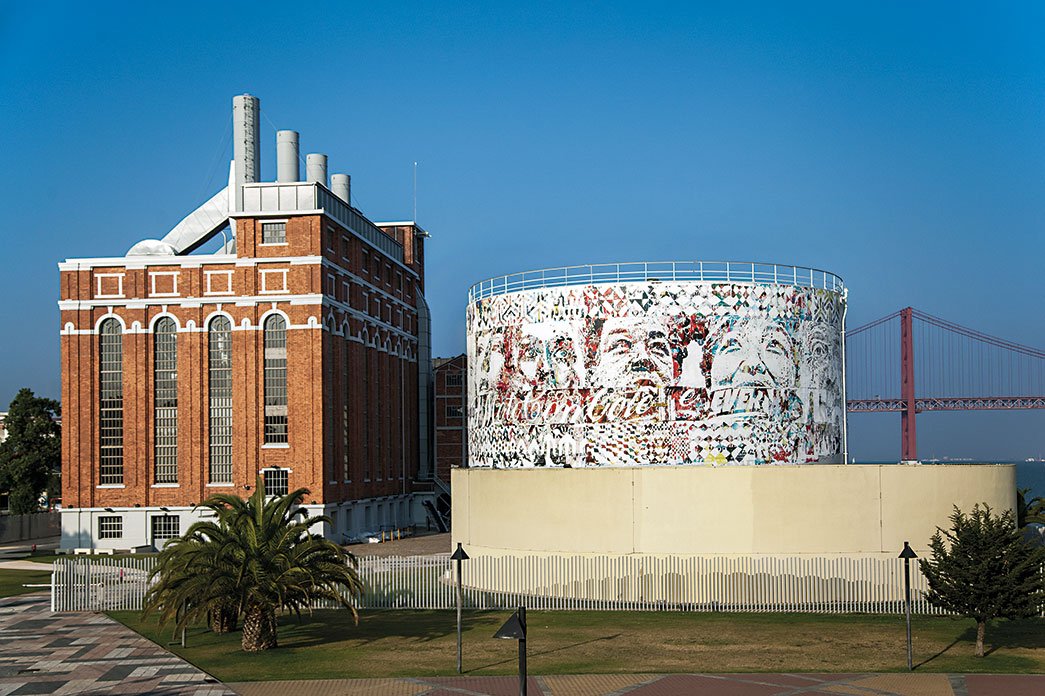 Is drawing by hand something that completes you?
Yes, ever since the days when I painted graffiti. Drawing by hand has been a fundamental tool, especially in the process of sketching ideas and trying to find solutions to questions of a formal nature. The starting point is always drawing by hand.

How does your work, even when done on a wall without forms and, often, lifeless, become an artistic and epic monument?
I do not know if I would call them epic monuments, but my main concern is always to humanise the space as much as the work itself. The intention is to develop a more organic art, closer to our experience of the transience that surrounds us. And by humanising the heritage built in the public space, a poetic counterpoint is created to the drabness of our cities, while at the same time people are invited to reflect on matters intrinsic to life in contemporary urban societies.

Does each piece exhibited portray a kind of visual poetry, simplicity and human emotions?
I am trying to explore and communicate various topics that are later developed more specifically in each body of work, but the essence of my work is a reflection on identity; on the present human condition; on the complex relationship that exists between human beings and the urban contexts where most of them live today; on the development model inherent to contemporary urban societies and some of its consequences for people and the environment.
I like to portray anonymous, ordinary people to create a narrative that speaks of these encounters and clashes between local characteristics and the uniform standards imposed by this globalising model. I try, at various symbolic and concrete levels, to make visible what is invisible, whether the substratum layers that are buried within the materials, or people and communities that are ignored in certain contexts.

You were born in Lisbon, but you grew up in Seixal. How did the experiences in this place influence your choices?
As much Lisbon as Seixal were instrumental in shaping my view of the world and, consequently, my life and work. I am sure that my art would not be the same if I had been born elsewhere. I grew up in a very peripheral area on the edge of Seixal, which was more like the countryside than the suburbs, but over the years the built area has been expanding and green spaces have been disappearing. This expansion of the city was very rapid, almost as if there had been an explosion in which you could clearly see the shock waves spreading. It made a strong impression on me, and even today, these observations on a process of unbridled development, on their consequences on people and the environment, guide much of my work. With adolescence I entered a more rebellious phase that coincided with this process. I also discovered graffiti at the same time, which significantly changed the way I came to see the city and the reality around me. Of all of this, what stood out the most was the desire to interact with the world, with people and the public space in cities.
Vhils explores various techniques. The bulk of his work can be split into two groups: one that uses subtractive techniques, based on chipping away or destroying part of the material (shredding through billboard posters, drilling into walls or using explosives, etc.); and another that uses techniques based on the addition of materials (non-destructive techniques such as cork agglomerate, metal or cement, pieces in paper, etc.). There is also a whole series of media that he explores, such as video installations. Of course everything varies according to the medium. Among the many works exhibited around the world, in Vhils’ eyes every project has had its importance, from the smallest to the most complex. But it is the work done with communities, such as in Portugal, Brazil, and China, that has given him a sense of accomplishment, because in these he has been working with people who are living in difficult situations, which makes it very rewarding in human terms. «As in the case of the expropriations and forced relocations with which I came into contact with Morro da Providência and Ladeira dos Tabajaras in Rio de Janeiro; or in Bairro 6 de Maio, in Amadora, for example, is a modest way of helping», he stresses.
The very fact that he has dedicated himself to urban arts has already seen him being awarded with the Ordem Militar de Sant’Iago da Espada (Military Order of Saint James of the Sword). «My greatest interest is to see how recognition can produce a return to continue to develop work and channel part of it to projects of a social nature. In this particular case, faced with the responsibility represented by accepting such recognition, it was only inevitable that I would question the legitimacy and foundation of that distinction. After the initial surprise and a long debate with myself, I decided, with humility, to accept it, also on behalf of all those who did not have the same opportunities I have had,» he mentions respectfully.
Vhils recently opened the solo exhibition Realm, at the Danysz gallery in Shanghai, China. He took advantage of part of the body of work he had presented in a solo exhibition held at the CAFA Art Museum, in Beijing in 2017 (under the title Imprint). The idea was to create a dialogue between the two cities through a body of work, which, initially, was inspired directly by the reality of Beijing, and now, in time, is inspired by Shanghai. Taking advantage of his visit to Shanghai, he will present the first showcase of the Festival Iminente outside Europe, celebrating a dialogue between the musical creativity from Portuguese and Chinese backgrounds.
In his day-to-day life, the artist divides his time between Vhils Studio; the Underdogs Gallery; the Festival Iminente; and Solid Dogma. But when he can, he likes to travel, listen to music, watch films and spend time with family and friends.