Suspended between the land and the sea 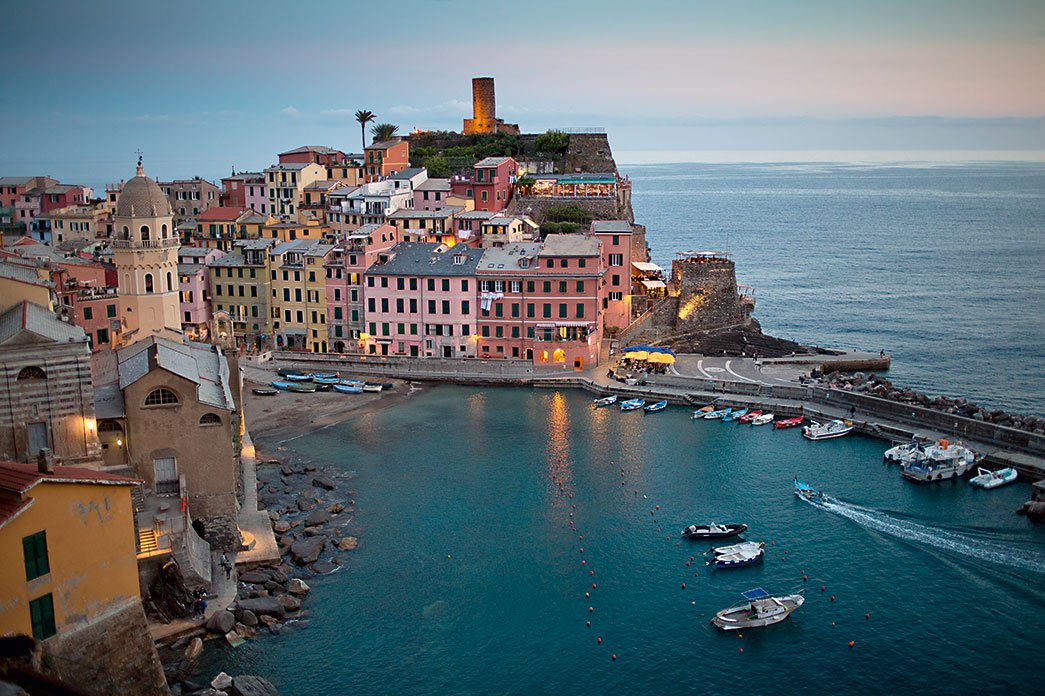 Hanging off cliffs ending in the sea, Cinque Terre used to be just fishing villages until they were discovered by tourists and transformed into a National Park, which was established in 1999.
Although they belong to the region of Liguria, they touch Tuscany and, for this reason, can be just as much part of the itinerary of anyone travelling to Genoa, as part of the travel plans of anyone visiting Florence.
As the five villages – Monterosso, Vernazza, Corniglia, Riomaggiore and Manarola – are close together and lined up, the best way to visit them is by boat or by train. Access by car is difficult and the few parking spaces are outside the villages. It is a good option to leave the car in the city of La Spezia, as you can start the boat or train journey from there. By boat, the colourful houses perched on terraces, seem suspended between the land and an unforgettable blue sea. The most practical option is, however, to go by train, since the five villages have railway stations. After La Spezia, come Riomaggiore, Manarola, Corniglia, Vernazza and, finally, Monterosso.

Cinque Terre touch Tuscany and, therefore, can be part of the itineraries of anyone visiting Genoa or Florence.

Narrow streets, colourful little houses, souvenir shops (which sell local specialities, such as the famous pesto sauce and sweets, liqueurs and lemon soaps), bars and restaurants (which sell cardboard cones filled with fried seafood) and, with the exception of Corniglia, there are pebble beaches in the five villages. But there are differences too, so visiting just one would not be enough to get an understanding of all the others. Riomaggiore may well provide the best photo of the trip; Manarola is the most beautiful when viewed from the sea; Corniglia is the only one that does not have access from the sea, which makes it less crowded and more charming; Vernazza has a castle overlooking the entire gulf; and Monterosso is the most dispersed and structured, with a large beach and a pleasant centre.
At one end, and on the other, as if it were a straight line with the Cinque Terre in the centre, we find Portofino, one of the most popular seaside resorts on the Italian Riviera, and on the other side Portovenere, nicknamed «the sixth Cinque Terre», with its beautiful seafront, a centre full of bars and restaurants and with a castle whose fortifications end in the sea.
Welcome to the Ligurian lands, made of rocks, terraces, coves, sea and palettes of a thousand colours. Benvenuti in Paradiso!