«We have excellent schools in Portugal and excellent architects» 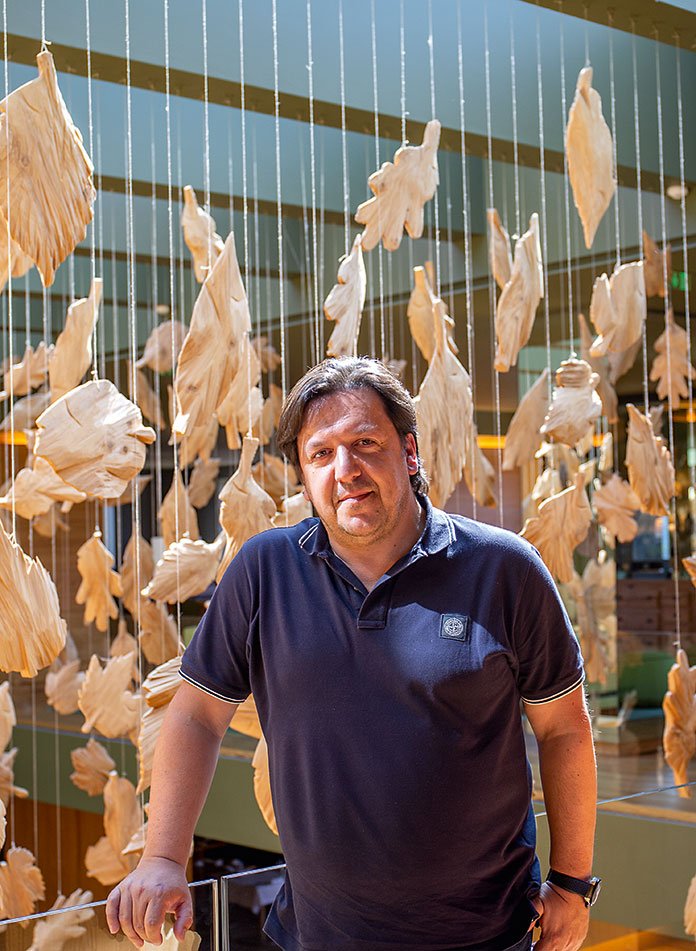 He wanted to be a commercial pilot. Because ever since he was a boy, his dream was airplanes. The dream never came true. So it was his knack for drawing, and egged on by his wife, that took him to the school of architecture. He became obsessed. And today, he believes «I couldn’t live without it». Fernando Coelho, from the firm FCC Arquitectura, is currently flying high, whether through architectural projects, or when taking to the skies, whenever he dares to fly. Although he may not pilot Boeings, he did realise his dream of learning to fly. He devotes much of his life to architecture. He has a dream: to design a bridge. During our conversation, he told us about the Monverde Wine Experience Hotel project, which is a wine tourism success in Portugal and which is currently undergoing a new expansion.

What has been your biggest challenge in the firm’s 16 years?
The projects are all different. I think each project is a project. Each one has a client and the clients are all different. They are all an adventure. In an architectural project, firstly you are always dealing with a lot of money and, when you deal with a lot of money, it is always complex. Then we are dealing people’s dreams. When we design a house, for example, no matter if it costs 100,000 Euros, or five million Euros, the effort and the dream of the family is the same. That’s why all the details and the involvement are always an adventure. Sometimes it takes a lot of patience; in a way we have to be sociologists, psychologists... I’ve already had fantastic instances (he laughs).

How challenging was it to design the Monverde Wine Experience Hotel?
This was the first hotel FCC has worked on. I visited various hotels, nationally and abroad, to see what the others were doing. I had to understand what was bad, so as not to do it here. We have been working on the Monverde process for eight years. When I was contacted about this project, parts already existed (the main house, for example). This has 30 hectares, it is almost a farming estate in the Alentejo, and the owners were acquiring land. When I got here there were ruins. Sr. Óscar’s idea was to have a house to welcome friends. We started designing and soon realised that this had different potential to what he wanted to do. We more or less proposed the final product we have today. The property is divided between two municipalities: Amarante and Felgueiras.

What was the biggest difficulty for you throughout the process?
The fact that the hotel is in two municipalities made things difficult, because building permission was required for both parts. And then the Portuguese Tourist Board, which didn’t believe the project would work. Because this area was not known as a tourist destination. Monverde’s first guests came for the architecture. When we designed it we thought about the sensations people have when they arrive, when they are in their room, when they go to the spa. We had many architects visiting Monverde, not only national, but mainly foreign ones. We have already won awards for the best wine hotel, in terms of landscape design and architecture. Then there is the communication part and the entire hotel service that also attracts. Then there are also various activities, such as being an oenologist for a day, designing your label, bottling...

«Whereas in a house we’re doing a home for a family, in a hotel it is almost a public building»

And now, in this second phase that you are designing, how has the whole process been?
In this second phase, the diffilcuty was to find construction workers, which is always a big difficulty… but we managed to get a fantastic team.

In terms of materials, do they differ much from the first phase?
They pretty much identical. In the first phase we thought that the hotel had to have an international green label. 80% of the stone you see was from the land itself; we discovered it by chance when digging. The timber is national thermally modified pine. Then there are the seven photovoltaic panels for electricity production; solar panels for sanitary water heating; and then all the river water, rainwater, is used for the reservoir, which serves to irrigate the vineyard and to supply the toilets. The second phase had been developed around the old house that belonged to the estate, where the agricultural tools were kept. The house is being remodelled to have six rooms, plus the experimental winery and ten rooms in an extension. In the latter, we thought of suites, with garden, with private pool, with wine bar and fireplace.

Which of the spaces in Monverde do you identify with most?
The centre’s skylight. I have been working with Paulo Neves for some years now and I like to blend sculpture with architecture. I brought him here during the works. The rain of leaves is the result, which enriches the space. The perspective of the space is completely different, the play of light and shadow…

Is it more difficult to design a wine tourism project than a residential one?
The importance is the same. It’s different in its essence, but there’s always an end customer, and, whereas in a house we’re doing a home for a family, in a hotel it is almost a public building, it’s not for anyone in particular but for everyone, and we have to come up with a concept.

You have projects on several islands in the Azores. What connects you to the Azores?
It was the Cella Bar project. And the difficulty that it entailed. Firstly because of its shape. The whole construction system was complex. When I got there I presented the first drawing and they all started laughing. I was like: «These guys can only be kidding with me». I asked: «Excuse me, but what are you laughing at?». They replied: «You’ll never be able to do this here». I, being an architect, said: «We do everything right, with an implementation project...» Later, I realised why they were laughing. To give you an idea, that shape was made by a gentleman who makes boats.

When did you know you wanted to be an architect?
I didn’t want to be an architect; I wanted to fly airplanes. I managed to do this too, later on. My dream, since I was a boy, has always been airplanes. I did paragliding; I was always up in the air. At the time, everything was lined up to this end, I did maths and descriptive geography, but, in my day there were no civil aviation schools yet, you had to go into the Air Force. I started going out with a girl, my current wife, and the Air Force course was six years long. And at the time, I had to do 16 years in the Air Force. It was a long time away from here. From an early age they said that I had a knack for drawing, and Paula said to me at the time: «Since you are not going to the Air Force, why don’t you try architecture?». I did her the favour (he laughs). I did the first year. I became obsessed. Nowadays, I don’t think I could live without it.

Is there any project you would like to do?
A bridge. Because it is a challenge.