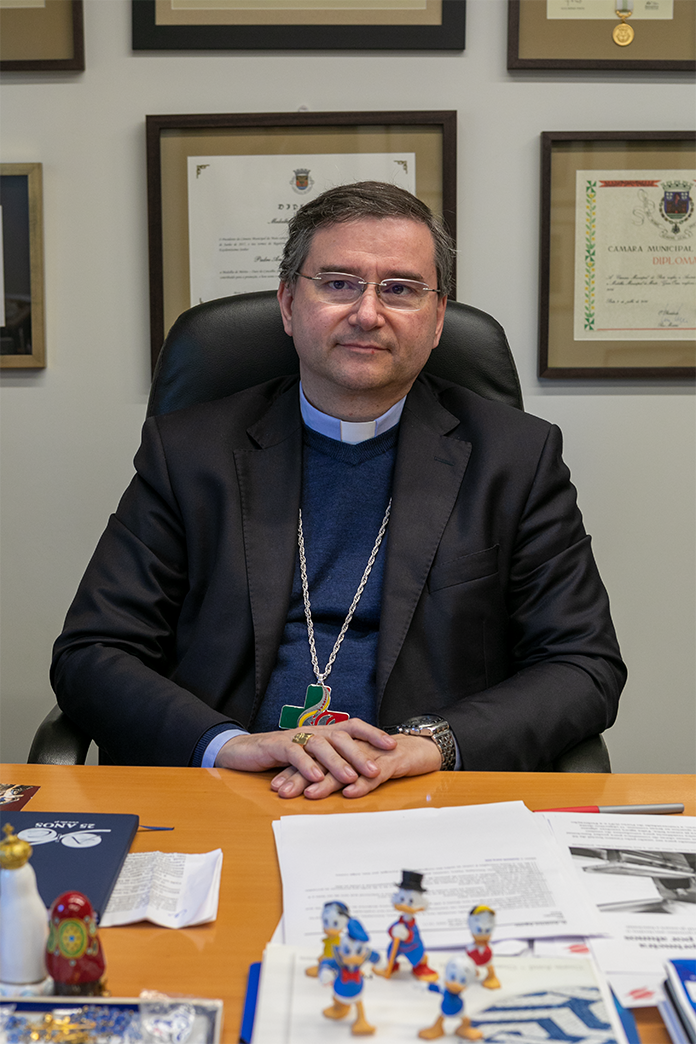 President of the Renascença Group, auxiliary bishop of Lisbon, president of the JMJ Lisboa 2023 Foundation and responsible for the Diocesan Commission investigating the sexual abuse of minors in the Church. But this is only a very small part of the extensive work of Américo Aguiar. A man of the north of Portugal, a man of God and a boy scout, who at 48 is one of the great national figures of the Catholic Church. Energetic and always forthcoming, he welcomed us in his office, at Rádio Renascença, in Lisbon, where he was accompanied by some friends.

A large part of who we are as adults is down to our childhood. So, what was little Américo like?
(He laughs) OK, so I’ll bring some friends into the conversation. I was a young boy from a parish, a place called Leça do Balio, which belongs to the municipality of Matosinhos and is right on the border with the municipality of Maia. I have always had a very close relationship, both with Maia and Matosinhos, as a teenager and later as an adult. I even worked in Maia Municipal Council, with Professor Vieira de Carvalho. And I was elected mayor of Matosinhos, with Narciso Miranda. I’m the seventh youngest of a bunch of kids. At a certain moment, I was at Sunday catechism school with my friends, more or less of the same age, and our favourite thing was Vasco Granja and cartoons on RTP. So, on Sunday mornings, as a kid, it was more comfortable for me not to go to Sunday school and watch television. I had a great afición for Scrooge McDuck. And a passion for Huey, Dewey and Louie, because they were boy scouts, and I always wanted to be a boy scout. In 1987, your friend here was 14 years old, and they announced in the parish that they were going to open a scout troop. I was one of the first to sign up. And so, they asked: «Name?» We’d answer, so-and-so. «Year of catechism?» And I said, I’m not in catechism. They told me: «Oh, but you have to go to Sunday school, because the CNE (National Scout Body) is Catholic scouting, you have to do catechism.» And so there I went, dragging my feet all the way to catechism. At a certain point, the scout leader, José Teixeira, said to me: «Hey, wouldn’t you like to go to the meeting they have in the Diocese of Oporto, in the Bom Pastor Seminary, in Ermesinde? There are meetings there once a month for boys who are thinking about becoming priests.» And that was a very strange thing...

Because it had never even crossed your mind to become a priest...
No! And worse, in the scout troup we had a young man, Augusto, who went to the seminary. And we made his life miserable. Today it would be called bullying (he laughs). And he dropped out. So, in light of that, this seemed all a bit strange. But I went there for a few months and then I left. At that time, I was very active in the civil sector. I worked in Maia Municipal Council and I was the first ‘eco-consultant’ in the country. I was also a candidate to the Municipal Assembly of Matosinhos and to the Parish Council of my town, in the elections of those years, in the early 90s. So, I was there for a few months in the seminary, but I left and continued my work.

«Sometimes you need a guy who has no shame on his face. And sometimes I’m that guy»

Did you leave convinced that the seminary was not for you?
Yes, ‘convinced as heck’. It’s easier now, looking back. But at that time, something wasn’t right. I was working hard, professionally fulfilled, but something was missing. One day, in the summer of 1995, I went to visit the rector of the Bom Pastor Seminary, Canon Sousa Marques. And he told me: «I’ve been waiting for you. You left the seminary, but I think you are touched, you are called. It just so happens that you were wrapped up in your heart, in your head, and in every way, with many things. So, it’s like this, come back, but on one condition, you disconnect from all that.» I was ordained in 2001, by monsignor Armindo Lopes Coelho and it was a very important journey. And then, I could see that Canon Sousa Marques had been right, when we have only one focus it’s one thing, when we act like multitasking printers there is always something that then doesn't work.

But your whole life has been guided by this. You are an energetic man, you have done everything, you have made it everywhere. Basically, that young man has continued to exist, on other terms...
Sometimes I accept that being this multitasking machine is useful for those around me and even for the people who end up enjoying this way of being. I often say that a holiday is to change the subject – it is enough to change the subject, the dossier, that I’m already resting. I don’t know if it's a quality or a defect, but I don’t like to just laze about.

«Everything bad that could have happened has happened»

It’s how you are...
It’s how I am (he laughs). I have been very happy to be involved in some activities, and tasks that have given me a lot of pleasure. I believe that this madness is a catalyst for, in institutions, in people and in various circumstances, making things happen. Sometimes you need a guy who has no shame on his face. And sometimes I’m that guy. Who requests, who asks and who provokes. I’ve always liked that. But only after fulfil everyday work, which was, by the time, to assist the bishops of Oporto, because I was the secretary, the vicar general, and I did what I could, with everyone’s help and the patience of the bishops and other colleagues. On Saint Peter’s Day, 2015, canon João Aguiar, my predecessor at Rádio Renascença, and canon Álvaro Bizarro spoke with the Bishop of Oporto, monsignor António Francisco dos Santos, consulting him if he would release me to come and preside over Renascença.

In fact, you have always been a communicator...
It was bittersweet. I confess that never in my life had Rádio Renascença and the management board crossed my mind. Never in my life. But, in 2015, I came to Lisbon and, in 2016, when Canon João Aguiar left Renascença, I became chairman of the board of directors, of management and then, on February 18, 2019, the phone rang and from then on, I was Auxiliary Bishop of Lisbon. When everything had more or less settled down, World Youth Day was added to the rest. So, just fun stuff.

«The media in general have suffered a lot»

The independent commission to the study of sexual abuses at the Catholic Church’s report will coincide with World Youth Day 2023. Could that overshadow the event, could it alienate young people, make them afraid to associate with the Church?
With regard to this dossier, from the moment that Pedro Strecht and his team started their work, we, the bishops in particular, should not give our opinion. In other words, we will let the work be done. As the slogan says, «Give voice to silence». There is too much noise, enough is enough. We must let things happen, let hearts be opened, let wounds be treated. It is obvious that the whole subject is one of suffering, but not of so much suffering as for people who have lived through the circumstances, and therefore, open hearts, total transparency, zero tolerance, as Pope Francis asks of us. It is needed. It is placing everything in the heart of God. Everything bad that could have happened has happened. Whatever will happen will not be comparable to the evil that happened in the lives of people with faces, with names, with real life stories. That was the problem, that was the suffering. What will come, in fact, will help us all to free ourselves, whether it is the Church, or the agents. I fear neither the calendars nor the subject, because what has to be done must be done, and there is no greater suffering or black cloud than what has happened.

How has it been to be at the helm of Renascença at a time when the media is facing so many difficulties?
The media in general have suffered a lot and this last economic crisis and the pandemic took us past the limits of our capacity for resistance and resilience. We are always aware, looking back, that when crises pass, we never return to previous levels. Canon João Aguiar told me, when I came here, that advertising is like a bolo-rei cake. Everyone takes a slice. With all these crises, we went from a bolo-rei cake to a rice cake and those who want a slice are the same. We’ve kept almost all our costs, but our income is less than half. We have had to readjust things and the pandemic has further accelerated the urgency of a new paradigm of financing and sustainability of the media, but I have no idea what that might be. It is not easy, because the various agents have different positions, journalists don’t all think the same, media owners don’t think the same, the state has a very special perspective... There is no easy way to understand it. But it is important for a democratic society to have media. And to have healthy media. That is fundamental.